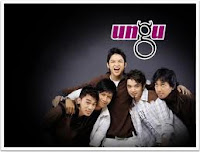 Ungu formed in 1996. Motor constituent is Ekky (guitar) and vocalist at that time Michael, while the drum is held by Van derr Krabb Pasha. In 1997, when Ungu was about to perform, Pasha Van derr Krabb 'disappeared' and was replaced by Rowman. Enda, who was previously his roadies Ekky also joined with the Ungu. Ungu and now consists of Pasha (singer), Makki (bass), Enda (guitar), Oncy (guitar), and Rowman (drums). Until 2007 they have produced 4 albums and 2 mini albums.

In 2000, Ungu began preparing for their first album, which finally was released July 6, 2002 titled song. Previously, Ungu come to fill two songs on the compilation album Click with lacunae, Borneo, Picnic, and Energy. The second song is "Desire" and "Flower". This album's first single, "Imagine Pseudo" a soap opera soundtrack original ABG (RCTI). Although somewhat successful, this new album got Platinum Award after almost 2 years this album was released.

When about to enter the studio for a second album, Ekky ruled out. Oncy who was fresh out of the Funky selected to replace Ekky Cpl. Ungu's second album was released in December 2003 Beautiful Place. The album was a candidate "Because He's You" as the first single and "Conscience" was chosen as the second single. Released just four months, sales had reached 80,000 (eighty thousand) copies. Significant amount when compared with the first album to 'have' to get platinum (150,000 copies) in a matter of time and a half years.

In 2005, Ungu became one of the artists who collaborated with Tim Christensen Tim Christensen on the latest album, "Compound". Hovering album was released in December 2005. On the third album with the single "This Time", Ungu got double platinum. This Time With a hits deliver MTV Exclusive Artist Ungu finished in December 2005. Echo "This Time" reaching the neighbor country, Malaysia. Four companies are scrambling to get the right label circulation in there. SRC, which overshadowed the company Siti Nurhaliza finally come out as winners.

Ungu out a mini album to welcome Ramadan 1427 H titled SurgaMu released September 2006. Within ten days since the release of mini album SurgaMu, has sold over 150 thousand pieces. Even Vice President Yusuf Kalla reward 'Inspiring' top SurgaMu religious album. Unfortunately, when they want to receive the award at the palace of the vice president, wearing a Ungu jacket over pants after jeans denied entry into the palace, by reason of clothes that do not comply with court protocol.

In the MTV Indonesia Awards 2006, the Ungu entrance in three nominations, the Most Favorite Group / Band / Duo, Best Director, "This Time" Abimael Gandy, and Video of the Year "This Time". Ungu with support for "A Mild Live Productions" and "Trinity Optima Production" to make a biography. Book entitled "A Mild Live Ungu Book Magazine" was launched on Thursday, May 10, 2007, in Jakarta. Printed 40 thousand copies, the book contains biographies of each personnel, Ungu discography, photos, and even chord songs Ungu.

Ungu is also often involved in making the soundtrack album. Ungu had contributed songs to the film being banned I Kiss Includes circulation. Ungu fruit also contributed three songs for the movie Brown is, two new songs, "Here For You" and "best friend", and include the song "Promise" from their third album Drift.

The format of the "SCTV Music Awards 2007" at the Jakarta Convention Center (JHCC), Ungu got 4 victories. Album produced SurgaMu Trinity / Prosound bring a recipient of the Ungu 'album Religion', 'Best Song Ngetop' and 'Best Video Clips Ngetop' to the tune of "If I Know". Hovering while the flagship song "Created For You" won the category of 'Album Rock Pop Duo / Group'.

Ungu re-released his fourth album titled Forever regular. This album was launched in four states at once, which is August 9, 2007 in Kuala Lumpur, Malaysia, August 10, 2007 in Singapore, Hong Kong August 12, 2007 and culminating August 15, 2007 in Jakarta, Indonesia. Flagship song on the album include, "Secret Love", "Love in the Heart", "The Meaning Of Love" and "Let Me".

Welcoming Ramadan 1428 H, Ungu released another album in the form of religious mini-album titled The Seekers Mu. In this album Ungu collaborated with Ustad Jeffry Al Buchori. This album only contains five songs, namely "The PencariMu", "Worship Sujudku", "Heart of Heaven," "Truly", and "my Lord". Before the mini-album was released, three of the five songs have been chosen as the theme of religious soap opera that aired during the month of Ramadan.

Ungu again won the award for the category 'Band Ngetop' at SCTV Music Awards 2007 event, which took place at the JCC Senayan Jakarta, Friday, August 24, 2007. In that event, Ungu managed to put another band, like the Band, Peterpan, Radja, and newcomers are suddenly popular, Kangen Band. In 2007, along with Samsons Ungu and naff, nicknamed 'The Rising Star' band by the organizers of a concert grand Soundrenaline, A Mild Live Productions and Detection Productions, also by the giant record label Musica Studio.

In addition to removing two religious album, in mid-2007, five members of Ungu together umra pilgrimage for the first time. Ungu also seeks to create a more intimate relationship with the fans, by providing scholarships to five needy Ungu fans.