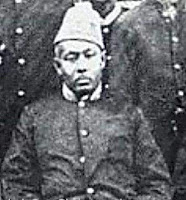 Lil Markam uleebalang derivative, it is the largest contributor of gold Monas. Born in 1925. His father Teuku Marhaban. Seuneudon and Alue Capli village, North Aceh Panton Labu. Since childhood Teuku Markam had been orphaned. When the age of 9, Teuku Marhaban died. While his mother had already died. Lil Markam then cared for her brother Cut Nyak Putroe. Had tasted education through grade 4 SR (elementary school). Lil Markam then grew into youth and education entered military service in Koeta Radja (Banda Aceh is now) and graduated with the rank of first lieutenant. Lil Markam Indonesia joined the People's Army (TRI) and join the battle in Tembung, North Sumatra, together with General Bejo, Kaharuddin Nasution, Bustanil Arifin and others.

During an assignment in North Sumatra, Teuku Markam active in various fields of battle. He even joined forces to reconcile the clash between the forces Manaf Simbolon Lubis. As a soldier liaison, Teuku Markam then sent by the Commander General Bejo to Jakarta to meet government leaders. By the leader, Markam Lil was sent back to London to become adjutant general Gatot Subroto. The task was carried Markam to Gatot Subroto died. Gatot Subroto is also a trust Teuku Markam to meet with President Sukarno. At that time, Bung Karno's indigenous entrepreneurs who want a truly capable menghendel Indonesia's economic problems. 1957, when Lil Markam rank of captain (NRP 12 276), returned to Aceh and established PT Karkam. He had clashed with Teuku Hamzah (Kodam Iskandar Muda) because "disiriki" by others. As a result of new Lil Markam was arrested and came out in 1958. Conflicts with Teuku Hamzah successfully conciliated by Sjamaun Eaglewood.

Out of prison, Lil Markam back to Jakarta with a PT Karkam. The company is trusted by the Government of Indonesia to manage war reparations to be funding the revolution. Furthermore Teuku Markam really wrestle with a number of business assets of the ship and some boats dock in Palembang, Medan, Jakarta, Makassar, Surabaya. Lil Markam expanding business because he also jumped in the export - import with a number of countries. Among others, to import cars from Japan's Toyota hardtop, iron concrete, steel plates and even had to import arms for the approval of Ministry of Defence and Security (Dephankam) and the President.

Markam Teuku commitment is fully supported the struggle of Indonesia, including West Irian liberation and the eradication of illiteracy was encouraged at that time-out by Sukarno. Markam said Teuku business results also become a source of state budget and to gather some 28 kg of gold to be placed at the top of the National Monument (Monas). As we know that the monument project is one of Sukarno's dream to improve the dignity of the nation. Teuku role Markam successful Summit (Summit) Asia Africa in no small thanks to the help of some funds for the purpose of the summit.

Lil Markam Indonesian conglomerate including one known to be close to the Soekarno government and other officials such as Minister of Public Works Sutami Ir, politician Adam Malik, Soepardjo Rustam, Kaharuddin Nasution, Bustanil Arifin, Suhardiman, employers and others Probosutedjo. At the time of Sukarno, the name of Lil Markam was extraordinarily popular. To the extent that Lil Markam had said to the shadow cabinet of Sukarno.

History then turn around. The role and contribution in building the economy Teuku Indonesia Markam seemed to be no purpose in the eyes of the New Order government. He was vilified as PKI and accused of being corrupt and Soekarnoism. Charges that are then delivered to the prison Teuku Markam in 1966. He was thrown into a cell without trial. First he put prisoners Budi Utomo, then transferred to Guntur, then switch to the Government Printing Jln Salemba prison. Then moved back into custody Cipinang, and finally transferred to Nirbaya prisoners, detainees to politicians in the area of ​​East Jakarta Pondok Gede. In 1972 he fell ill and had to be treated at Gatot Subroto Army Hospital for approximately two years.

Transition of power from Sukarno to Suharto makes life difficult and Lil Markam concerned. He had just been released in 1974. It was, reportedly, thanks to the good offices of a number of loyal friends. Lil Markam just released without any compensation from the New Order government. "It's true, then Teuku Markam will not claim their rights. But this time she's oppressed and persecuted," said Teuku Syauki Markam, a son of Lil Markam.

Soeharto as Chairman of the Presidium of the Cabinet Ampera, on August 14, 1966 to take over the assets of Teuku Markam offices, land and others who later managed by PT PP Berdikari Suhardiman established for and on behalf of the government of Indonesia. Suhardiman, Bustanil Arifin, Zamzami Amran (these last two are the leaders in Aceh Jakarta) including friends Markam. But not much help restore the asset PT Karkam. Instead they participate in managing the assets under the banner of PT PP Berdikari. Suhardiman was the first to lead the company. On the board of directors listed Sukotriwarno, Edhy Tjahaja, and Amran Zamzami. Subsequently led Lieutenant General Achmad PP Berdikari Tirtosudiro, Drs Nurhani Ahman, and SH Bustanil Arifin.

In 1974, Suharto issued a decree N0 31 of 1974 whose contents include affirmation of the status of the former assets of PT Karkam / PT Aslam / PT Sinar morning is taken over the government of Indonesia in 1966 are "borrowing" the value of Rp 411,314,924.29 as investments state capital in PT PP Berdikari. Presidential Decree was published just in Markam Teuku release from custody.

Sekeluar from prison, in 1974, founded the PT Marjaya Teuku Markam and working on a project-prorek World Bank for infrastructure development in Aceh and West Java. But none of these giant projects undertaken PT Marjaya both in Aceh and West Java, will be unveiled by the Suharto government. PT Marjaya projects in Aceh include road construction Bireuen - Takengon, West Aceh, South Aceh, Medan-Banda Aceh, PT PIM and others. Teuku Syauki suspect, Order regime was so scared when Lil Markam regain its footing. For this reason, said Teuku Syauki, Markam projects "deemed" wind. Lil Markam died in 1985 from complications of various diseases in Jakarta. To the end, the government never rehabilitate his name. Even to this day.