Please Share this article is useful !
Soeharto was President of the Republic of Indonesia. He was born in Kemusuk, Yogyakarta, on June 8, 1921. His father named Kertosudiro a farmer who is also the assistant village headman in the fields of irrigation, while his mother was Sukirah.

Soeharto entered the school when he was eight years old, but often moved. Originally schooled in the Village School (SD) Tens, Godean. Then move to SD Pedes, because her mother and her husband, Mr. Pramod moving house, to the South Kemusuk. However, Mr. Kertosudiro then move it to Wuryantoro. Soeharto left at home his sister who was married to Prawirowihardjo, an orderly peasantry.

Until finally chosen as a model soldier in the School Officer, Gombong, Central Java in 1941. He officially became a member of the military on October 5, 1945. In 1947, Soeharto was married to Siti Hartinah Mangkunegaran employee of a child. 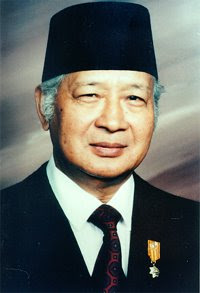 In 1949, he successfully led his forces recaptured the city of Yogyakarta from Dutch colonizers hand at that time. He was also the Guard Commander Sudirman. In addition, once the Commander Mandala (the liberation of West Irian).

Due to the deteriorating political situation after the eruption G-30-S/PKI, MPRS Special Session, March 1967, appointed Soeharto as Acting President, was inaugurated as President of the Republic of Indonesia Second, in March 1968. Soeharto ruled for more than three decades past six elections, until he resigned, May 21, 1998.

Both HM Soeharto RI resident died at 13:10 pm Sunday, January 27, 2008. Great generals of the MPR was awarded the honor as the Father of National Development, died at the age of 87 years after being treated for 24 days (from 4 to January 27, 2008) at the Pertamina Hospital (RSPP), Jakarta.

Then at approximately 14:40, the body of former President Soeharto's departure from the RSPP to the residence at No. 8 Jalan Cendana, Menteng, Jakarta. Ambulance carrying the body of Soeharto family vehicle and accompanied by a number of relatives and bodyguards. A number of journalists pushed closer when the motorcade was moving towards Jalan Cendana, resulting in a hit television journalist.

Along the road and Jalan Tanjung Cendana thousands of people welcomed the arrival of the motorcade carrying the body Pak Harto. Sobs broke out as a series of citizens of the vehicle carrying the corpse of former President Soeharto entered the Sandalwood Road, at approximately 14:55 on Sunday (27/1).

And Than it, President Susilo Bambang Yudhoyono, accompanied by Vice President Jusuf Kalla and some ministers who are following a limited cabinet meeting on food security, taking the press conference for 3 minutes and 28 seconds at the Presidential Office, Jakarta, Sunday (27/1). President expressed deep condolences on the death of former President Haji Muhammad Soeharto two.