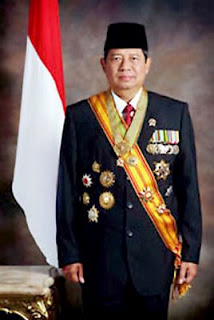 Susilo Bambang Yudhoyono is the president of the RI-6. Unlike the previous president, he was the first president elected directly by the people in the second round of presidential elections 20 September 2004. The best academy graduates (1973) which was familiarly called SBY was born in Pacitan, East Java, 9 September 1949. His wife was named Christian Herath, is the third daughter of the late Gen. (Ret.) Sarwo Edhi Wibowo.

Retired four-star general was the only child of a partner R. Soekotjo and Sitti Habibah. Decreased the blood of soldiers of his father, who retired as a Lieutenant. While his mother, Sitti Habibah, the daughter of one of the founders Ponpes Tremas. He had two sons called Agus Yudhoyono Harimurti (follow the trail and achievements and match SBY, graduated from Akmil 2000 with the award-winning Star Makayasa Adhi) and Edhie Baskoro Yudhoyono (SMA Taruna Nusantara's best graduates, Magelang who then pursue the science of economics).

SR Education is the future of the most decisive foothold in SBY. When sitting on the bench in fifth grade, he was the first to know and be familiar with the name of the National Military Academy (AMN), Magelang, Central Java. AMN later changed its name to Akabri. SBY entry SMP Pacitan, located south of the square. This is a school for children idol Pacitan City. Inheriting his father's harsh discipline, SBY struggle to realize the ideals of her childhood in the army to enter the Indonesian Armed Forces Academy (Akabri) after graduating from high school end of 1968. However, due to late register, SBY does not directly enter Akabri. So SBY also had been a student of Mechanical Engineering Institute 10 November Surabaya (ITS).

But then, SBY would choose to enter the First School of Teacher Education (PGSLP) in Malang, East Java. While studying at PGSLP Malang, he prepared to enter Akabri. In 1970, finally entered Akabri in Magelang, Central Java, after passing the final acceptance test in Bandung. SBY one armed with Agus Wirahadikusumah, Ryamizard Ryacudu, and Prabowo Subianto. During his education, which earned the nickname SBY Giraffes, very prominent. Evidently, the best graduates belaiu Akabri won title in 1973 with Adhi Makasaya awarded the badge.

On his return from East Timor, Yudhoyono became Mortar Platoon Kostrad 330 Airborne Infantry Battalion 81 (1977). After that, he was placed as the 17th Airborne Mabrigif Pasi-2/Ops Kujang I Kostrad (1977-1978), 330th Airborne Infantry Battalion and Kipan Kostrad (1979-1981), and Young Paban SOps General Staff (1981-1982). When serving in the Army Headquarters, the school had the opportunity SBY back to the United States. From 1982 to 1983, he followed the Infantry Officer Advanced Course, Fort Benning, USA, 1982-1983 as well as practice-On the job training in the 82-nd Airborne Division, Fort Bragg, USA, 1983. Then follow the Jungle Warfare School in Panama, 1983 and antitank Weapon Course in Belgium and Germany, 1984, as well as the Battalion Command Course, 1985. At the same time serving SBY Commandant Infantry Training School (1983-1985)

Then he believed served, and Battalion 744 Dam IX / Udayana (1986-1988) and Paban Madyalat SOps Dam IX / Udayana (1988), before his education at the Command and Staff College Army (Seskoad) in Bandung and out as the best graduate Seskoad in 1989. SBY also had a Seskoad Lecturer (1989-1992), and placed in the Information Office of the Army (Dispenad) with tasks such as making speeches Army Chief of Staff Gen. Edi Sudradjat. Then when Edi Sudradjat serving Armed Forces, he was drawn to the Armed Forces Headquarters to be Personal Staff Coordinator (Korspri) Armed Forces Commander Gen. Edi Sudradjat (1993).

Then, he returned to duty in combat units, was named a Commander of the Airborne Infantry Brigade (Airborne Infantry Brigade and) 17 Kujang I / Army Strategic Reserve Command (1993-1994) along with Lt. Col. Riyamizard Ryacudu. Then served Asops Military District (1994-1995) and commander 072/Pamungkas Kodam IV / Diponegoro (1995). Shortly thereafter, SBY believed served to Bosnia and Herzegovina to become an officer in the United Nations (1995). He served as head of the UN Military Observers (Chief Military Observer United Nations Protection Force) charged with overseeing the ceasefire in the former Yugoslavia based on the Dayton agreement, the United States between Serbia, Croatia and Bosnia Herzegovina. After returning from Bosnia, he was appointed as Chief of Staff Military District (1996). Then served Commander II / Sriwijaya (1996-1997) and Chairman and Chairman of the Armed Forces faction Bakorstanasda Assembly (MPR Special Session of 1998) before becoming Chief of Staff of the Territorial (caster) Armed Forces (1998-1999).

Meanwhile, the step of his political career began on January 27, 2000, when he decided to retire early from the military when it believed served as Minister of Mines and Energy on the administration of President KH Abdurrahman Wahid. Shortly afterwards, Yudhoyono was forced to leave his position as Gus Dur asked Mentamben because Menkopolsoskam served. On August 10, 2001, President Megawati trust and melantiknya a Cabinet Minister for Politics and Security Mutual-Aid. But on March 11, 2004, he chose to resign from the office of Coordinating Minister for Politics and Security. This step makes the resignation freely run over the political rights that would drive her to the chair of the national leadership summit. And finally, in the second round of direct presidential elections 20 September 2004, the Yudhoyono Jusuf Kalla pair up with the people of Indonesia won the confidence of the majority of votes in the Attas 60 percent. And on October 20, 2004 he was inaugurated as the 6th President.

Here is the complete data about President Susilo Bambang Yudhoyono