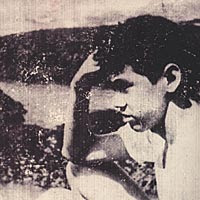 Soe Hok Gie is a person of Chinese descent who was born on December 17, 1942. A son of the couple Soe Lie-Pit-a novelist with Nio Hoe An. Soe Hok Gie was the fourth of five brothers family Soe alias Greetings Piet Lie Sutrawan, Soe Hok Gie is the younger sister of Soe Hok Djie which is also known as Arief Budiman. Since schooldays, Soe Hok Gie Soe Hok Djin and have often visited a public library and reading some of the parks on the fringes of the street in Jakarta.

Since schooldays, Soe Hok Gie Soe Hok Djin and have often visited a public library and reading some of the parks on the fringes of the street in Jakarta. According to one researcher, since I was elementary school (SD), Soe Hok Gie even been reading the works of serious literature, such as works of Pramoedya Ananta Tur. Perhaps because his father was also a writer, so do not be surprised if he was so close to the literature.

After graduating from elementary school, the brothers chose different schools, Hok Djin (Arief Budiman) chose to go Canisius, while Soe Hok Gie choose a school in Junior High School (SMP) in the Gambir Strada. That said, while sitting on this bench, he received a copy of a collection of short stories Pramoedya: "The story of Blora" Pram-not including the rare short story at the time?

At the time of the second grade at the school this menangah, Soe Hok Gie poor performance. In fact she is required to repeat. But what the reaction of Soe Hok Gie? He did not want to repeat, he was treated unfairly. Finally, he chose to change schools than to sit longer in school. A Protestant Christian schools allow him to enter the third grade, without repeating.

After of the SMP, he made it into Menengan School (SMA) Canisius literature majors. Was her sister, Hok Djin, also continued in the same school, but other departments, namely the natural sciences.

While in high school Soe Hok Gie is an interest in literature more deeply, and at the same time he became interested in the history of science. In addition, berpolitiknya consciousness began to rise. From here, the beginning of an exciting journey of recording it; writing is sharp and full of criticism.

There are good things that measured during the study at high school, Soe Hok Gie and his brother managed to graduate with high grades. Kemuidan sisters went to the University of Indonesia. Soe Hok Gie chose the faculty of arts majoring in history, while Hok Djin into the psychology faculty.

In the Gie is an activist college student. Many believe the movement Gie a major effect on the fall of Sukarno and including the first sharp criticism of the New Order regime.

Gie was very disappointed with the attitude of my friends are in the era contemporaries in 66 demonstrations criticizing and condemning the government officials and then after they pass there and forgot to take sides with the vision and mission of the armed struggle 66. GIE is being invited oposisif and difficult to compromise with the opposition.

It also co-founded GIE Mapala UI. One of importance is the rise of the mountain. At 3.442m Slamet leading mountaineering, he quotes Walt Whitman in his diary, "Now I see the secret of the making of the best person. It is to grow in the open air and to eat and sleep with the earth ".

Thought and football terjangnya recorded in his diary. His thoughts about humanity, about life, love and death. Gie in 1968 had been to America and Australia, and his favorite LPs Joan Baez seized at Sydney airport for being anti-war and communist. Gie graduated in 1969 and went on to become a lecturer at his alma mater.

Together Mapala Gie UI plans to conquer Mount Semeru is 3.676m high. When Mapala find funding, many are asking why climb a mountain and Gie said to his friends:

"We explain what exactly is our goal. We say that we are human beings who do not believe in the slogan. Patriotism may not grow out of hypocrisy and slogans. A person can only love something healthy when he came to know its object. Indonesia and loving home can be grown by getting to know people from nearby Indonesia together. The healthy growth of young people should also mean a healthy physical growth. That's why we go up the mountain. "

December 8 before leaving Gie had written a note: "I do not know what was happening to me. After I heard the death of Ariel Kian Fong last Sunday. I also have to always remember the feeling of death. I want to talk-talk before saying goodbye to semeru. With Maria, Rina and also want to make an intimate event with Sunarti. I guess this is the effect upon the death of Kian Fong is so strange and so fast. "Hok Gie died on Mount Semeru in 1969 just a day before the birthday-27 from inhaling toxic fumes in the mountains. He died along with his partner, Dhanvantari Idhan Lubis. Further records for the Mount Semeru disappeared along with the death of Gie in the top of the mountain.

Soe Hok Gie's tomb
December 24, 1969 Gie buried in Menteng Pulo, but two days later moved to the cemetery Kober, Tanah Abang. In 1975 Ali Sadikin dismantle Cemetery Kober and should be moved again, but his family and his friends refused to remember that if he had died his body was burned and his ashes should be spread on the mountain. With these considerations eventually Gie bones cremated and the ashes scattered on the summit of Mount Pangrango.