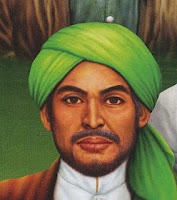 His given name Jaffar Sadiq. He was the son of the couple and Syarifah Ngudung Sunan (Sunan Bonang's sister), son Nyi Ageng Maloka. Sunan Ngudung was mentioned that one of the sons of Sultan who traveled to Egypt in Java. In the Sultanate of Demak, he was appointed Commander of the War. Festival on the Sunan Kalijaga much studied. Then he ventured into various arid regions in Central Java as Sragen, Simo up South Mountain. Berdakwahnya any way mimic Sunan Kalijaga approach: very tolerant of the local culture. Even more subtle way of delivery. That's why the mayor - who struggled to find a preacher to the Holy predominantly fast-appointed followers.

Way of approaching the Ghost Festival is to utilize the symbols of Hinduism and Buddhism. This is evident from the architecture of the Holy Mosque. Its towers, gates and shower / ablution padasan representing eight Buddhist path. A form of compromise between Festival.

One time, he was fishing communities to go to the mosque to listen to his sermons. For that, he deliberately tether his cow, named Kebo Gumarang in the courtyard. People who glorify Hindu cow, to be sympathetic. Especially after they heard about the letter of explanation Festival Al Baqarah, which means "cow". Until now, most traditional societies Holy, still refusing to slaughter cattle.

Festival also compose stories ness. The story was drawn up in serial, so that people interested in following the rest. An approach that seems to adopt the story of the 1001 nights Abbasid Caliphate. With a binding that's Festival community.

Not only do such preaching Festival. As his father, he was also a Commander of the Sultanate of Demak War. He fought at Demak, under the leadership of Sultan Prawata, fought against the Duke Jipang, Arya Penangsang.

according to history, he also includes one of the poets who took the initiative to write short stories that contains the spirit of philosophy and religion. among the pieces of the famous creations, is Gending Maskumambang and Mijil. The famous Imam Ja'far Sodiq in Iran is not just as a priest of the Shiites, but also as a leading in matters of law and other sciences.

Thus, it is our opinion Jafar Sodiq famous in Iran as a saint, a priest of the most revered Shiite groups as well as respected, it would not Ja'far Sodiq a trustee who was a member of the trustee in the ninth Java, whose tomb was found in the Holy city, as for Ja'far Sodiq the latter, known as the Festival. Besides acting as a teacher of Islamic religion. as well as a strong one Sharia, Holy Senan became senopati of the Islamic empire in Demak

Among other things belonging to his legacy is in-the Holy Mosque, which later became known as the tower of the Holy Mosque. Therefore, in the courtyard there is a beautiful ancient tower. Regarding the origin of the Holy name by fairy tales (legend) that live among the local people is that the first Festival ever go on a pilgrimage while studying in Arab lands, then beliaupun also taught there. at a time, in the arab lands supposedly an epidemic outbreak of a dangerous disease, which later subsided, thanks to the holy sunan., therefore, an emir there willing to give the prizes to him. however, he refused, only keepsake he asked for a stone. The stone he came from the city of Baitul Makdis, or Jerusalem, then as a warning to the city where Jafar Sodiq life and living, then given the name of the Holy. Even the tower is located in front of the mosque itself also became known as the Holy tower.

As for the name of the Holy Ghost or Al is in the book Encyclopedia of Islam, among others, stated: "Al kuds the usual Arabic name for Jerusalem in later times, the olders writers commonly call it the temple of al makdis (According to some: mukaddas), with really Meant the temple (of Solomon), a translation of the hebrew bethamikdath, but it Because applied to the whole town. " Regarding the struggle Festival in spreading the religion of Islam is no different from other saints, which is always worn path of wisdom, with the strategy and tactics so that people can be invited to embrace Islam.