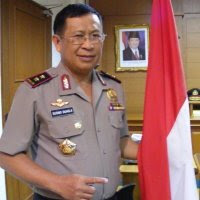 Susno Duadji a police academy's valedictorian and received his education among many others PTIK, Law S-1, S-2 management, and Sespati Police. He also received training in between courses and Senior Investigator of Crime Course (1988), Hostage Negotiation Course (Terror) at the University of Louisiana USA (2000), Comparative Study of the Criminal System in Kuala Lumpur, Malaysia (2001), Comparative Study of Police System in Seoul, South Korea (2003), and the Anti Money Laundering Training Counterpart in Washington, DC, USA.

Susno Duaji was the second of eight children. His father was Duadji, a chauffeur, and his mother, Siti amah a small trader. He was the husband of Herath and father of two daughters.

1977 graduated from the Police Academy, who spent most of his career Susno as traffic police officers, had also visited 90 countries to learn to uncover cases of corruption. His career began to skyrocket when he was believed to be Wakapolres Yogyakarta and in succession after the police chief in North Maluku, Madison, and Malang. Susno began to be drawn to Jakarta, when assigned to a law enforcement chief at the National Police Commission and represent the institution established in 2003. In 2004 he was posted at the Center for Financial Transaction Reports and Analysis Center (INTRAC). About three years at INTRAC, Susno then sworn in as police chief and West Java since October 24, 2008, he became Head of Criminal Police Headquarters replaces Bambang Hendarso Danuri. Susno code since it is known by Truno 3, or the number three most influential people in the police after the police chief and deputy chief.

Susno statement that reads "It was like here there alligator lizard. Why fight the alligator lizard "has aroused great controversy in Indonesia. As a result of this statement the term "crocodile lizard fight" which is very popular. The term is also triggered a wave of protests from various parties and make a lot of those who feel anti-corruption called themselves as the Lizard and is against the "Crocodile" is likened to the Police.

Code "Truno 3" referred to in a conversation intercepted by the Commission in connection with the case of Century Bank. Susno statement that reads "Do not Ever Setori I" is also very famous when he served as West Java Police chief. On 5 November 2009, Susno Duadji resign from office, but from 9 November 2009 he was back on the Kabareskrim Police. On 24 November 2009, Police formally Kabareskrim him from office.