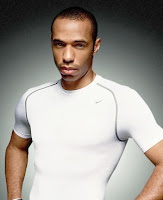 Thierry Daniel Henry was born August 17, 1977 in Les Ulis, Essonne, France. Henry is a descendant of the Antilles, his father, Antoine, came from Guadeloupe (La Desirade island), and his mother, Maryse, from Martinique. Henry was born and grew up in harsh environments, Les Ulis district of Paris, which turned out to have a good football facilities. Since the age of six years Henry has shown excellent potential, making it become a member of the local club CO Les Ulis by Claude Chezelle. His father was the one who encouraged Henry to follow the practice, although Henry is not so little interested in football. Five years later, Henry played in his first game for the club.
Henry then joined U.S. Palaiseau in 1989, but after one year, his dispute with the club, making him the club moved to Viry-Chatillon. U.S. Palaiseau coach Jean-Marie Panza, Henry to follow his new club, and later became his mentor.
In 1990, AS Monaco sent scout Arnold Catalano to watch Henry play. Henry scored six goals and his team won 6-0. Catalano immediately invited Henry to join Monaco without going through the testing period. Catalano arranged for Henry to follow the course at the elite Clairefontaine academy, and although reluctant to accept Henry's leadership academy for poor school achievement, Henry was allowed to complete the course, and then joined AS Monaco as a youth player. In the end, Henry signed a professional contract with AS Monaco and made his debut in 1994. Wenger put Henry on the left wing because he believed that speed, ball control and skill would be more effective Henry facing wing-back rather than a central defender. In his first season with Monaco, Henry scored three goals in 18 appearances.
Wenger continues his search for the best position to Henry, and considering that Henry should play as a striker, but Wenger still in doubt. Under the direction of his manager, Henry managed to get France Best Young Player award in 1996, and in the 1996-97 season, consistent performance helped the club win the Ligue 1. In the 1997-98 season, Henry was instrumental in bringing the club into the UEFA Champions League semi-final, and simultaneously create a new record for the French player, scoring seven goals in the championship. In the third season, Henry's first time playing for the French national team, and become part of the team that won the 1998 World Cup. Henry continued to play well at Monaco, in five seasons with French club, Henry scored 20 goals in 105 league appearances.
Henry left Monaco in January 1999, one year before a friend and teammate David Trezeguet, and moved to Italian Serie A club Juventus for £ 10.5 million. Henry played as a winger, but he was ineffective against the Serie A defensive discipline in this position, and he only scored three goals in 16 appearances.
In August 1999, Henry moved from Juventus to Arsenal, with £ 10.5 million transfer fee, and reunite with his former manager, Arsène Wenger. Henry at Arsenal would later evolve into one of the world's best soccer players, and although this transfer is not far from controversy, Wenger believed that Henry deserves to be bought with the price paid. Henry entered to replace fellow French striker, Nicolas Anelka, and Henry immediately trained to be attack by Wenger, a move that will bring many blessings. However, Henry had doubted his ability in football in England is fast and rough, when he failed to score in his first eight games. After several difficult months in England, Henry even conceded that he had to "re-taught the art of being the attacker". This doubt end up with the success of Henry scored 26 goals in the Premier League 1999-2000 season. Arsenal ended the season in second place, behind Manchester United, and lost against Turkish side Galatasaray in the UEFA Cup final of 2000.
After the success of winning Euro 2000 with France, Henry entered the 2000-01 season with a more stable league. Although it scored fewer goals and assists than the previous season, his second season at Arsenal Henry has a very good, and he became the top scorer. With one of the best offensive units in the league, Arsenal can compete with Manchester United competing for the top level league. But Henry remained frustrated because he still has not succeeded in bringing Arsenal to win the league, and repeatedly expressed his desire to make Arsenal a great club.
Success finally came in the 2001-02 season. Arsenal won the league by seven points over runner-up Liverpool, as well as winning the FA Cup by beating Chelsea 2-0. Henry became the top scorer with 32 goals, and led Arsenal to first get a double and his first trophy for the club. Many are hoping Henry will repeat the success of this World Cup with France in 2002, but surprisingly, France has escaped the group stage.
2002-03 season to once again become a productive season for Henry, scoring 42 and gave 23 assists, including exceptional for an attacker. That way, Henry returned to lead Arsenal to FA Cup win. In this season, Henry compete with Manchester United striker Ruud van Nistelrooy in the number of goals, and in the end Henry was defeated by a margin of one goal. Even so, Henry still managed to get the award PFA Players 'Player of the Year and Football Writers' Association Footballer of the Year. Henry also finally getting the recognition that he is one of the world's best player, with FIFA Player award in 2003.
In June 2007, after eight years at Arsenal, Henry moved to FC Barcelona for a fee sebesan £ 16.1 million. Henry also received similar success in the French national team, winning the 1998 World Cup and Euro 2000. On October 2007, Henry surpassed Michel Platini to become France's top scorer. Outside court, motivated personal experience, Henry is active as a spokesman for anti-racism in football. His success makes Henry became one of the best selling football players; Henry frequently appeared in advertisements for Nike, Reebok, Renault, and Gillette. now he is on the NY Red Bulls club.