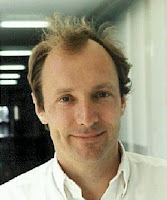 Sir Timothy John "Tim" Berners-Lee, KBE (TimBL or TBL) (born in London, England, June 8, 1955, age 56 years) is the inventor of the World Wide Web and the chairman of the World Wide Web Consortium, which regulate its development. He is a computer scientist who invented and developed a global network of virtual or www. which makes the popular three-letter twins in the world of information technology (IT). Then what is the relationship with the Internet www? The Internet is a world of computer networks are formed and developed first by the U.S. Department of Defense Research. Meanwhile, the WWW is a medium for people to be able to share documents, pictures, movies, music and information, as well as sell goods and services.
If the internet is a highway where the traffic flow data, the www is his browser (currently popular term). The browser allows users to surf the Internet and display the desired data. Berners Lee is the author of the first browser program and the first WWW server in the world. Currently, the commonly used browsers are Internet Explorer, Netscape and Mozilla.
Berners-Lee also wrote the software that defines the Hyper Text Markup Language (HTML), the Uniform Resource Locator (URL), and Hyper Text Transfer Protocol (HTTP). All of it is a programming language that is used a lot of people to display the content of a site and protocol how sites can be found on the internet and communicate with each other.
In 1980, when it was still a free contractor at CERN, Berners-Lee proposed a project based on the concept of hypertext (hypertext) to facilitate sharing and updating information among researchers. Given the CERN is a multi-national institutions, Berners Lee wanted to create a software that can link data and information he had and other researchers. Thus they can work more efficiently. He called the software Enquire, short for Enquire Within Upon Everything, the title of the encyclopedia which he remembers as a child. This idea was then developed outside the organization CERN. Lee thought, why limit it in the CERN network only? What if scientists elsewhere to share information? So, he created a system that eventually evolved rapidly growing network sepesat the Internet itself.
After leaving CERN to work at John Poole's Image Computer Systems Ltd., he returned in 1984 as a research fellow. He used similar ideas which he used in Enquire to create the World Wide Web, where he designed and built the first browser (called WorldWideWeb and developed on NeXTSTEP) and first web server called httpd.
The first website Berners-Lee (and therefore it is also the first web site) is located at http://info.cern.ch/ and put online for the first time on August 6, 1991. Lee then launched its browser in 1991. But not many people who use the WWW media it finds, until a few years later a man named Marc Andressen launch a more popular browser, Mosaic. In 1994, Berners-Lee founded the World Wide Web Consortium (W3C) at Massachusetts Institute of Technology. Marc then founded Netscape. Since then the Internet and WWW users to develop so rapidly.
Until now, Berners-Lee still remain humble and do not want to get popular status. Many still do not know this man's work force, the World Wide Web. One of the greatest contributions in advancing the World Wide Web is not patent it so it still can be used freely. On July 16, 2004 he was given the honor of KBE by Queen Elizabeth II in honor of his services.
What do Lee at this time, not apart from life in the past. Since early childhood, parents Tim had taught him to think creatively. Even as a child, Lee often play with imaginary numbers in mind (like how the square root of minus 4). When Lee began studying at Oxford, he was able to assemble your own computer from used electronic goods TV. He also studied physics because it combines the concepts of mathematical physics and electronics. "Physics is fun" he admits.
When Marc became a millionaire with a product made, Lee with a vision far into the future decide to take part in many non-profit and not profit from the discoveries and expertise. Currently, Tim Berners Lee as Director of the World Wide Web Consortium (W3C) is based at Massachusetts Institute of Technology. W3C is an organization that has an 400-member with a staff of approximately 40 people scattered around the world.
The purpose of this organization is to develop technologies that can be used cross-platform (interoperable technologies), set the specifications, rules, creating a variety of software and other tools that can optimize the use of its findings, the World Wide Web. Members consisted of Microsoft, Adobe, Intel, Macromedia, Oracle, and more. They work together to develop technologies that exploit the WWW that can be used by more people. Which means also share knowledge to others.
Some time ago, Tim Berners Lee was honored as one of 100 influential people in TIME magazine this century. His name can be equated with the computer scientist Alan Turing, and the pioneering 'caliber' weight of such a variety of other fields of psychoanalysis, anthropology, physics, biology, economics, technology and even airplanes.
References