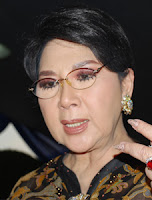 Titiek Puspa, whose real name is changed to Kadarwati Sudarwati and finally converted into Sumarti born in the Cape, Tabalong, South Kalimantan, 1 November 1937. The name "Titiek Puspa" Titiek which is taken from the nickname of daily and Puspa of 'Puspo' father's name. The name is also taken to the name of the accompanying orchestra "PUSPA SARI" he leads his own and the accompanying singing early in his career.

Early singing career began in Semarang, a city where Titiek Puspa now known as the legendary diva Magazine Women Kartini, singing contest "Radio Star". Not only to sing in it, 'grandparent Point' also shows in its totality that had worked on some very popular operetta TVRI viewers, such as operettas Garlic Red onions, Ketupat Lebaran, Humane Kartini Kartini and Ronce-ronce.

Records of the first black disc with a label GOOD, contains songs in the corner lips, Tomorrow Night You Kujelang, and a duet with the song Indada Tuty Daulay Siririton, Gang of Four Sariman musical accompaniment. In mid 1960, he became a singer Titiek Puspa remain in Jakarta Studio Orchestra. At that Titiek Puspa lot of guidance from the Iskandar (songwriter and orchestra leader) and Zainal Ardi (her husband own a radio announcer of the Republic of Indonesia Jakarta). As a singer who began to climb in popularity, Titiek has not created a lot of songs in the album, many songs were created for example by Iskandar, Mus Mualim, there is also Wedasmara.

It was only in the album The Black and Ribbons (1963) which contains 12 songs per album it is his own and became popular at the time, but it's also Mother Prayer album contains 12 songs, 11 songs were his creations with a song's creation Mualim Mus. From the album The Black, the song popularized his name is The Black, Leave, I and Asmara. It could also be said that with the album The Dark, Mother Prayer album is a legendary album containing songs as Girls Minah Hamlet, Abstinence Backward, an increasingly plugged Titiek Puspa as a singer and songwriter Indonesia is good.