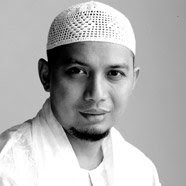 KH Muhammad Arifin Ilham or known as uztadz Arifin Ilham born in Banjarmasin, June 8, 1969, Arifin Ilham is the second of five children, and her only son. Arifin's father was the seventh descendant of Sheikh Al-Banjar, the great scholars in Kalimantan, while his mother, Hj. Nurhayati, birth Haruyan, Barabay, Middle River District Hulu. A year after marriage, the couple gave birth to their first daughter in 1967. Because of their first child girl, how happy they were when her second child is male.

Nurhayati said that the pregnancy of her second child, he was mediocre, nothing special signs. Only, unlike his four daughters, while in the womb, babies are very active one. Kicking his legs were very strong, so that the mother often grimacing with pain.

Babies born on June 8, 1969 was later given the name Muhammad Arifin Ilham. Unlike the four other siblings, who at birth they weigh an average of 3 pounds more, the baby weighed 4.3 kilograms this one with a length of 50 centimeters. "Surprisingly, the baby is born with teeth, namely the upper jaw," recalls Nurhayati.

The baby then grow up healthy. Year old was able to walk and not long after that he began to speak. After Siti Hajar, one by one brother Arifin was born. Namely, Qomariah born May 17, 1972 and the youngest Fitriani born October 24, 1973.

When she was five, his mother entered by Arifin Aisyiah to kindergarten and then directly to the SD Muhammadiyah is not far from his home in Banjarmasin. Arifin confess, when I was in elementary school that he considered lazy and stupid. "They say Banjarmasin, Arifin was babal. Arifin can only read and write Latin letters after grade 3, "Arifin recalled that every time talking about her always called his own name.

In SD Muhammadiyah Arifin only until grade 3, for fighting against their classmates. The problem, he is not willing to have one of his friends are bothered by being small-bodied classmates are quite large. Arifin lose a fight because his opponent karate champ. His face was bruised and torn lip. In order not to fight again, his father was then transferred to SD Arifin Eagles.

Elderly residential home located at Simpang Arifin New gnashing RT 7/RW 9, Banjarmasin city, right next to her grandmother, the mother of the mother Arifin. As an employee of Bank BNI 46, his father was often out of town duty Banjarmasin, sometimes until two or three months. Arifin's father admitted that he was not a lot to educate their five children, so that eventually a lot to educate Arifin is a wife and mother-in-law. Arifin said that the way to educate both parents was hard. "Both mother and grandmother when sentenced joy, pinching or hitting. Both derivatives, if nyubit and hit hard and hurt so much, "joked the young cleric.

who was born in Jakarta, Jakarta, June 8, 1969, this includes an animal lover. Adoptive mother's house in Jakarta, he maintains many binatamg, including owls, monkeys, and chickens kate.

Beginning April 1997, he was given a snake catches villagers were found in the bush. Because inadvertently bitten Arifin this reptile. However, he did not realize that he was poisoned. While on the way to driving a car, he felt something unusual, his body was hot, inflamed, and blue.

Seeing such a situation Arifin, Ny Cut adoptive mother took over the wheel, to the nearest hospital. However, some hospitals refused on the grounds of inadequate medical equipment. Even some doctors in some hospitals is convicted, age Arifin only one percent. Because of the difficulty of getting help for 11 hours, the situation more serious Arifin.

Weakened heartbeat. Seeing the condition of his adopted son who is getting worse, trying to come to Ny Cut Saint Carolus Hospital (Central Jakarta). Alhmadulilah the hospital to receive it. Arifin directly placed in the ICU. Infusion were installed in the body. To assist the task of the lungs, heart, and his heart was very weak, the doctor inserts a tube into his mouth sticks.

With the help of God, after one month of five days at the hospital said he had passed the critical period and into the healing period. Although his condition was much better, Arifin experience a change in his voice. According to the analysis of doctors, this is caused by the installation of a hose once in the mouth for a long time.

But no one knows God's plan, just with her voice, it becomes more easily recognizable Arifin worshipers just to hear his voice. As told Arifin, during the critical period, he received a spiritual experience that is extraordinary. In his subconscious he felt was in a village a very quiet and deserted.

After a stroll around the village, met a mosque, which is then entered. Inside the mosque was already waiting for three rows of pilgrims dressed in white. One of the pilgrims and then asked him to lead their dhikr, remembering Allah SWT.

The next day he returned to dream. It's just a little different. This time he felt was in the middle of the village whose people running scared because of the arrival of some people who are considered as the incarnation of Satan. His presence, the people were screaming and asking him to be their helper was cast out demons.

The next day he returned to dream. This time he was asked by a father to treat his wife who was possessed. The father heard the request, Arifin hurry, but God wills other. His wife apparently died before he could be helped Arifin. Armed with supernatural experiences she experienced, Arifin also strengthen the human heart to be a reminder not to forget the remembrance.

Many activities are done. One of the most memorable was the lead of remembrance for the inmates in Cipinang. According to Arifin, these activities provide excellent impact in so many of the inmates could not stem the tears, repented of his sins.

Although many blasphemies, Arifin also been doing dhikr in Nusakambangan LP, which among others also attended by Tommy Suharto. In 1998, Arifin fill a lecture in a house in Condet, East Jakarta. This is where he met with Wahyuniati Al-Waly, a devout Muslim, who later became his best man.

Not long after that meeting, he bermimpin in front of the Kaaba with Yuni standing beside him with a clean white shirt. Curiously, the next morning he called Abah (Arifin call to his father), asked about his dream. Abahnya mean that Yuni is given by God to her soul mate. So they went up to the altar on 28 April 1998.

Yuni's sister who was his class in Fisipol Unas rate figure of her husband as a good, romantic, affectionate, smart, and strong religious foundation. When asked his show schedule is so crowded, with a modest Arifin said, Alhamdulillah to date he is still given the opportunity to always pray tahajud three o'clock every morning until dawn.

Even if he slept only about three hours, but when in a vehicle to a place of remembrance event he finds time to sleep in the car. According to Arifin, the show has been filled by the end of August. There is one thing that held by the propagators of this Banjarmasih birth, which holds promise.

Therefore, three times he was forced to refuse a request to preach with the State Secretariat of President Megawati. '' I do not want to disappoint the people who have been away the day waiting for my arrival,'' he said. Arifin confess, before the 2004 election is now a political party that asked that he campaigned for the party. There's even a big party, which ensures that it will at least be a member of Parliament.

'' But I want a chain (rope) beads, which can accommodate all the people,'' said the preacher who lives in Depok since 1999. His attitude to always be a 'chain of beads' it was 'sweet fruit'. Each event is always filled with the remembrance that led pilgrims from various backgrounds and status. At a minimum, this scene looks when he led the recitation in the Masjid Al-Amr Bittaqwa in Mampang Indah Housing II, Depok, on Sunday (4/5) last.

From 06.00 am, the mosque can accommodate only 500 people had been crowded with worshipers. Those who attended the recent past are accommodated in tents around the mosque. Ahead at 08.00, is a sea of ​​people who looked white baseball cap and clothing colors mostly pilgrims. Promptly at eight, Arifin came and went directly to the stage in front of the mosque.

He was accompanied by Justice Party president Dr Hidayat Nurwahid, former Army Chief of Staff Gen. (Ret.) Harsono, Habib Abdurahman Semith that comes with dozens of clerics from Semarang, Indonesia Muslim leader Habib Husein Jamiatul Alhabsji, and a number of other scholars. Next, for two hours, thousands of pilgrims Az-Zikra Remembrance Assembly, the name given to his association Arifin, drifting and hysterical in a ritual of remembrance.

Once syahdunya this remembrance event, no matter entrepreneurs, artists, directors, and a variety of professions who come to the show from various places in the country, moved to tears. In fact, many sobbing. Arifin himself kept wiping her tears continued to flow with the two that brought handkerchiefs.

However, according to Arifin, not including the ritual cry of remembrance. Remembrance was, he said, not just sit down and say your praises to Allah SWT. '' The most important of remembrance is, in the heart should always remember and feel the presence of God Almighty,'' explained the father of two children. Arifin divide remembrance includes four things.

First, always remember God's remembrance in the hearts of the liver. Second, the sense of remembrance, which means being able to capture the language of God in the universe of motion. Third, oral recitation, a form of speech translation of the word of God asthma care. Fourth, a charity which is the application of remembrance piety. While the recommendations are that zikirnya pilgrims dressed in white, Arifin expressed his philosophy. White, said this Unas Fiskipol alumnus, is the color that symbolizes purity and color are highly favored Prophet Muhammad.