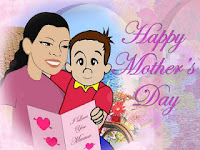 History of Mother's Day started with a meeting of women fighters Women's Congress held in Indonesia I 22 to 25 December 1928 in Yogyakarta, in the building that became known as the Road Mandalabhakti Wanitatama Adisucipto. Attended by about 30 women's organizations from 12 cities in Java and Sumatra. The results of the congress is one of them is formed Women's Congress which is now known as the Indonesian Women's Congress (Kowani).

Women's organization itself has been around since 1912, inspired by the struggles of the heroine of the 19th century such as M. Christina Tiahahu, his Dien Cut, Cut Mutiah, R.A. Kartini, Walanda Maramis, Dewi Sartika, Nyai Achmad Dahlan, Rangkayo Rasuna Said and others.

The incident was regarded as one of the important milestones of the history of the struggle of women in Indonesia. Leaders of women's organizations from different regions of the archipelago gathered together as the mind and spirit to fight for independence and improving women's lot. Various issues when it is thought to work on the unity of women archipelago; the involvement of women in the struggle against independence; the involvement of women in various aspects of nation building; trafficking of children and women; improve nutrition and health for mothers and infants; early marriage for women , and so forth. Without fanfare marked gender equality, women fighters perform a variety of critical thought and effort is very important for the progress of the nation.

Mission diperingatinya Mother's Day was originally more to commemorate the spirit and struggle of the women in this nation's quality improvement efforts. It also reflected the spirit of women from different backgrounds to unite and work together. In Solo, for example, 25 years of Mother's Day is celebrated by making charity market is the result for Labour Welfare Foundation fund scholarships for women and girls. At that time Mother's Day Solo committee also held a general meeting which passed a resolution asking the government to control prices, especially staple food ingredients. In the 1950's, Mother's Day memorial takes the form of marches and rallies women to voice their interests directly.

One important moment for the women is the first woman to become a minister is Maria Ulfah in 1950. Before independence the Congress of Women involved in the international movement and the struggle for independence itself. Kowani in 1973 became a full member of International Council of Women (ICW). ICW category serves as a consultative council of the United Nations.

Today, Mother's Day in Indonesia celebrated to express love and gratitude to his mother, praise the mother's mothers. Various activities at the memorial was a special gift, editing flowers, a surprise party for mothers, various culinary competitions and berkebaya, or freeing the women from the burden of daily domestic activities.