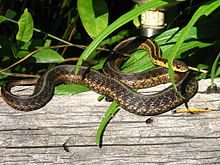 Snakes are reptiles that did not legged and long bodied. Snakes have scales like a lizard and both are classified into the scaly reptiles (Squamata). The difference is-legged lizards in general, have ear holes and eyelids can open the lid. However, for those cases did not legged lizards (eg Ophisaurus spp.) This distinction is blurred and can not hold onto.

The snake is one reptile that developed the world's most successful. In the mountains, forests, deserts, plains, farms, residential neighborhood, right down to the sea, can be found snake. Only, as is generally cold-blooded animals, the snakes are rarely found in cold places, such as mountain peaks, in Ireland and New Zealand and the snow fields or polar regions.

Many kinds of snakes all his life wandering in the woods and almost never on the ground. Many other species of living reptiles on the ground or infiltrate infiltrate under the litter or a pile of rocks. While most other aquatic life or semi-aquatic in rivers, swamps, lakes and seas.

Snakes prey on various species of animals smaller than himself. Aquatic snakes prey on fish, frogs, tadpoles, fish and even eggs. Tree snake and terrestrial snakes prey on birds, mammals, frogs, types of reptiles, including their eggs. Large snakes like pythons prey on flowers can be a goat, antelope, deer and even humans.

Snakes eat their prey round, that is, without chewing into pieces smaller. Teeth in the mouth of the snake does not have a function for chewing, but simply to hold the prey that are not easily separated. In order to smoothly swallowed, the snake usually choose to swallow prey with its head first.

Some snakes, such as python and rat snakes, kill their prey by means melilitnya that she could not breathe. Venomous snakes kill prey with venom, which can paralyze the respiratory and cardiac nervous system (neurotoxins), or which may damage the blood circulation (haemotoksin), in a few minutes. Can be injected through a bite at a time usually contains digestive enzymes that facilitate digestion of the food when it is swallowed.

To warm the body and also to help smooth the digestion, snakes often need to sunbathe (basking) in the sun.

Most types of snakes reproduce by laying eggs. The number of eggs could be a few grains only, up to tens and hundreds of items. Snakes lay their eggs in holes in the ground, caves, holes weathered wood, or under a pile of dry leaves. Several types of snakes known to watch over their eggs until hatching; even python 'incubating' eggs.

Most of the snake, like a snake sacking mottle, and shoots the snake dead sea snakes 'birth' children. Actually, they do not deliver as well as mammals, but their eggs develop and hatch inside the parent body (ovovivipar), then exit the small snake.

A kind of primitive snakes, the blind snake or serpent Rhampotyphlops braminus wire, so far only known to the females. Small worm-like snake is thought to be able to lay eggs and reproduce without a male snake (parthenogenesis).

In the holy books, most snakes are considered as enemies of man. In the Bible (Old Testament) is told that the devil incarnate in the form of a snake, and persuaded Eve and Adam, so deluded and must leave the Garden of Eden. In the Mahabharata, Krishna as an incarnation of Lord Vishnu small beat the five-headed serpent of evil. In one Hadith the Prophet. There was a suggestion to kill the 'black snake coming / in the house'.

These assumptions, however, also influence and make most people feel hate, if not fear, the snake. Although the real fear was not groundless, or more due to the lack of general knowledge of the properties and the possible dangers posed by snakes. In fact, cases of snake bites, let alone to cause the death very much less when compared to the case of road accidents, or cases of death (by illness) caused by mosquito bites.

On the other hand, the snake also has hundreds or thousands of years exploited and utilized by humans. Extremely venomous cobras and pythons pembelit often used in performances of courage. Bile, blood and flesh of some kind of snake is considered a potent medicine is high, especially in China and other eastern regions. While some types of snake skin that has a high value as a jewelery, shoes and bags. Like the lizard, snake skin (especially python, snake bags, and anaconda snakes) that are traded around the world reach hundreds of thousands to millions of pieces of raw skins per year.

In fact, the snake just now getting extinct due to a variety of arrests, murders are not unfounded, as well as habitat destruction and the environment. Snakes that had participated in controlling the rat population plays in the fields and gardens, has generally been low or shrinking in number. It is not surprising, in places where rice and broken rice-stricken hordes of rats, as in some places in Sleman, Yogyakarta, local farmers now need to give back (reintroduction) manifold fields snakes and snake hunting ban in the village.

Snakes have no ears and the eardrum, currently do not have the privilege of any eye or ear sensory acuity. His eyes are always open and covered with a thin membrane that is easy to see the movement around him, unfortunately he could not focus his views. The new snake can see clearly at close range.

Senses is a mainstay of the snake is on the belly scales, which can capture the thrill of man or other animals move.

That there is a hole between the eyes and mouth of a snake can serve as thermosensorik (heat sensor) - This organ is called niche or Jacobson's organ. Snakes can also find out the temperature changes due to the arrival of other creatures, such as land snakes have a niche that is very sensitive.

That man was not afraid of snakes because snakes themselves are actually afraid of humans. Snakes can not chase people, the slow movement was no match for humans. Snake moving average of around 1.6 km per hour, this type is the fastest snake in Africa mambaa who can run at speeds of 11 miles per hour. While humans, by comparison, can run between 16-24 miles per hour.