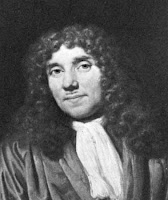 Antony van Leeuwenhoek (1632-1723) was born in Delft, the Netherlands. He comes from the family of the middle and almost all his life so municipal employee in a position that is not so important. Leeuwenhoek's discovery was another great result of his hobby-micingkan eyes squinting through a microscope glass. At that time, of course, people can not just run to the store and buy a microscope, because it Leeuwenhoek membikinnya itself. He is by no means a professional lens polisher, who never had special education in that field. Even so, the expertise developed very extraordinary, far beyond the habits of the professionals at the time.

Although the microscope was discovered people before Leeuwenhoek was born, he did not use it. Instead, he carefully and appropriately small lens brush. Leeuwenhoek's microscope capable of producing power of observation that has a much better than existing microscopes. One of the lenses still have the capacity to raise about 270 times, there is even a sign that he managed to make more perfect than that.

Leeuwenhoek had extreme patience and diligent observer, had a keen vision and feeling of infinite wonder. With a tiny lens that he examined the various kinds of things, from hair to sperm dog, from the rain to the small insects. Also the fiber, the skin and various other objects. He made careful notes and made detailed sketches of each of what she observes.

Commencing in 1673 and onward, Leeuwenhoek always in a relationship with "The Royal Society of England" one of the leading scientific institutions in that era.

Although he had no background of higher education (only primary school and only know one language, Dutch), he was elected a member of the scientific institutions in 1680. He is also a member of the Academy of Sciences in Paris.

Leeuwenhoek twice married, had six children but no grandchildren. His health is good, still hard at work in his life lately. Many famous figures visited, including the Russian Czar, Peter the Great, and the Queen of England. He breathed efflux also in Delft in 1723 at the age of 90 years.

Leeuwenhoek did many important discoveries. He was the first to describe spermatozoa (1677), and was one of the early outlines of red blood and white blood. He is opposed to the theory of spontaneous generation of simple forms of life and exposes a lot of evidence against it. He was able to show, for example, that small animals wingless blood-eaters breed in a way similar to the winged insects.

Ultimate discovery appeared in 1674 when he made the first studies to germs. This is one of the great inventions of semen resulting in enrichment in human history. In the tiny droplets Leeuwenhock discover a whole new world, full of unexpected world, full of life. Although not yet realized, this new world has very important significance to mankind. In fact, "very small microscopic objects" is often observed that the power factor essential for human life and death. Once it has been examined, Leeuwenhoek able to find germs in various different places: in the well and in puddles, in the rain, in the mouth and intestines into the human anus. He described the various forms of bacteria, protozoa and also calculate its size.

The use of large discoveries of Leeuwenhoek did not start until the advent of Pasteur nearly two centuries later. The fact is, the whole object of microbiological problems practically no activity until the 19th century when an enhanced microscope developed. One might suppose Leeuwenhock question were never born into the world and its findings did not occur until the 19th century, it may make little difference to the progress of science. However, there is no denial that Leeuwenhoek who discovered germs, and through him the world of science became aware of his presence.

Leeuwenhoek is often regarded as the man who by good fortune happened to slip on an important scientific discovery. This is completely far from the truth. The discovery of micro-organisms it is a normal result of the fabrication microscope careful with quality unmatched by existing time and patience and accuracy as a researcher. In other words, the findings are the result of a combination of skill and hard work, the opposite and has nothing to do with fate than luck.

The discovery of germs is an important scientific discoveries made by the individual rare. Leeuwenhoek actually work alone. Discovery of protozoa and bacteria can not help anyone-not the case in most of the progress in the field of biology - and instead of a natural growth from prior biological knowledge. This factor, along with the importance of the use of his invention, which makes it a high place in the list order book.