Please Share this article is useful !
The third President of the Republic of Indonesia, Jusuf Habibie Bacharuddin born in Pare-Pare, South Sulawesi, on June 25, 1936. He was the fourth child of eight siblings, spouse Alwi Abdul Jalil Habibie and RA. Tuti Marini Puspowardojo. Habibie, who is married to Hasri Ainun Habibie on May 12, 1962 was blessed with two sons namely Ilham Akbar and Thareq Kemal.

Habibie passed his childhood with his brothers in Pare-Pare, South Sulawesi. The nature firmly adhered to the principle has been demonstrated Habibie since childhood. Habibie, who had a penchant for riding a horse, had to lose his father, who died on 3 September 1950 due to a heart attack.

Shortly after his father died, Habibie moved to London to study at Gouvernments Middlebare School. In high school, he began to look outstanding achievements, especially in the exact sciences lessons. Habibie a favorite figure in the school. 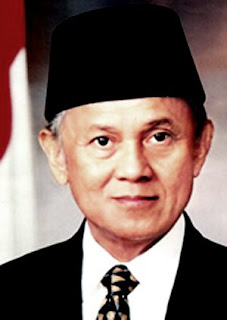 After graduating high school in Bandung in 1954, he entered the University of Indonesia in Bandung (ITB Now). He received his Diploma from the Technische Hochschule, Germany in 1960 and then getting gekar Doctorate from the same place in 1965. Habibie was married in 1962, and had two children. 1967, to honor Professor (Professor) at the Institute of Technology Bandung.

In Indonesia, Habibie 20 years as Minister of State for Research and Technology / Chief BPPT, leading the 10 companies owned strategic industries, selected MPR became Vice President, and was sworn in by the Chief Justice to replace President Soeharto. Suharto handed the presidency to Habibie under Article 8 of the 1945 Constitution. Until finally forced Habibie also resigned due to referendum East Timor voted for independence. MPR his accountability speech was rejected. He went back to ordinary citizens, restored live migrated to Germany.

Most of his work in calculating and designing several aircraft manufacturing project: