At the beginning of his life, al-Razi was interested in art music. But al-Razi also interested in many other sciences, so most of his life was spent to study sciences such as chemistry, philosophy, logic, mathematics and physics.

Although in the end he was known as a treatment such as Ibn Sina, al-Razi in the beginning was a chemist.? According to a tradition cited by Nasr (1968), al-Razi left the world of chemistry because his eyesight began to blur from experiment to experiment chemistry and chemical sciences with an extensive lunch and then studied medicine-medicine, which seemed to interest him in his youth. 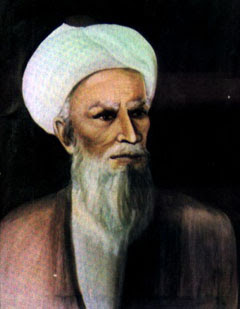 He said that a patient who has recovered from her illness was caused by a chemical reaction response contained in the patient's body. In a relatively quick, he established a hospital at Rayy, one of the famous hospital as a center for research and medical education.? A short time later, he is also believed to lead the hospital in Baghdad ..
Several scientific papers in the fields of chemistry, namely:
According to HG Wells (Western scholars well-known), the first class of Muslim scholars is that mengasas chemistry. So do not be surprised if if only they have developed the chemistry for nine centuries starting from the eighth century masehi