Please Share this article is useful !
Andre Taulany or often referred to as Stinky Andre / Andre OVJ born in Jakarta, 17 September 1974 with a mother named Rasidah Hanum Hasibuan and dad named Robby Haumahu, he worked as a sitcom actress, film, as well as a comedian.

Andre is an Indonesian artist who has played in several soap operas such as Love Story, Light of Mine Also besides Andre Stinky also has starred in movies such as Apocalypse is near, Kunfayakun, and Implant Pocong. Better known as Andre Andre OVJ since his role in the show Comedy Opera Van Java TRANS 7.

After joining the band Staind, better known by the name Andre Andre Stinky. Together Irwan (bass), Nanno (guitar), and Edy (drums) and Ndang (already out); Stinky has released eight albums out The Best Of Love Song Of Stinky and Stinky.

Their latest album titled True Lovers released on May 19, 2007. Like the previous album the band ever reach sales of 1 million copies through their hits "Could" and "Do not Close You", the album they are still the theme of love. Andre finally out of the band Staind who had raised him, and tried to pursue a solo career, hits that had issued the song Love the palace which is also the OST. I am the patron Arjunaku. 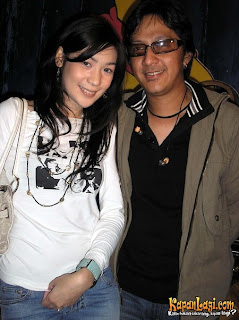 In addition to singing and music, the couple's son Robby and Rasidah Hanum Haumahu Hasibuan also tried acting by playing in several films, including Apocalypse is near (2003) and Love Story (2001). At present, the name is not known as andre taulany musician but as a comedian. Because acting is hilarious in a variety of events to make himself better known comedians as

comedian. Some of the events that helped to rebuild its presence in the entertainment world country that is through acting kocaknya in the comedy "Opera Van Java". Besides OVJ, andre had also acted in several events such as comedy, Ngelenong Nyok, Comedy Betawi, and Lenong.co.id

After contact with several women, among them, Linda Rachman, Beautiful Ludiana and Ayu Pratiwi. Men with 173 cm high and weighing 56 kg was finally moored her to the women of Padang, Rien Wartia Trigina (used to be called Erin). They married on December 17, 2005. On 30 November 2006, Andre's wife gave birth to their first child-sex male.

Love Story
Doomsday is near
Light of Mine is also
Guidance