✖
Home Biography Biography of Andy Rubin~Inventor of the Android OS

Biography of Andy Rubin~Inventor of the Android OS


Please Share this article is useful !
Andy Rubin was born on June 22, 1946 in New Bedford, United States. He is the developer of the Android OS. Since childhood, Rubin has been used to seeing lots of new gadgets. This is because his father, a psychologist who swerved into the direct marketing business, which will store electronic products sold in the room Rubin.

He has a great interest in all things that smell robot. At Carl Zeiss AG, where he first worked after graduating from college, Rubin was placed in a robotics division, on digital communications between network devices and manufacturing measurement. Following from Carl Zeiss, he had worked in the field of robot in a company in Switzerland.

Rubin's career in the field of robotics seems increasingly clear, but his life changed because of holidays in the Cayman Island in 1989. While visiting the tropical islands in Jamaica, Rubin accidentally met with a man named Bill Caswell. This man was sleeping on the beach, driven from a cottage after a fight with his girlfriend. Andy offers him shelter, and as his debts, Casswell offered the job. 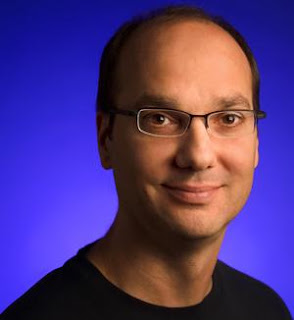 Amazing coincidence that the man was working at Apple. In Apple, Rubin had periods of fun. At that time, Apple is still in good condition thanks to the Macintosh computer. Apple culture was transmitted to the self-Rubin. There he had time to do mischief, such as reprogram the phone system so he could pretend to be the CEO, John Sculley. Such a joke would probably like Steve Jobs, the man who likes to make jokes over the phone, but when it was a period of Apple without Jobs.

From manufacturing, Rubin moved to the research at Apple. Then, in 1990, Apple did a spin off to form a company called General Magic and Rubin participate in it. General Magic focuses on the development of handheld devices and communications. The engineer of a workaholic, including Rubin, of course, has developed a software called Magic Cap. Unfortunately, Magic Cap is not received from the handset and telecom companies. Magic Cap is applying some just do it briefly. General Magic was finally destroyed.

Some developers at General Magic, along with several veterans of Apple, then set up Artemis Research. The company is developing something called WebTV, an early attempt to combine the Internet with television. Rubin joined Artemis for the co-developed the WebTV. When Microsoft bought Artemis, in 1997, Rubin was joined by the giant company. Rubin typical episode occurred again mad at Microsoft. Rubin built a camera-equipped robot to work on his colleagues. Crazy, the robot is connected to the Internet and in one incident was burglarized by a party outside of Microsoft. In 1999, Rubin out of WebTV (and that is, he is no longer a Microsoft employee). He then rented a store in Palo Alto, California, and called the store as a laboratory.

In a place filled with a variety of toy robot collection Rubin, born of an idea for a new product. Along with several colleagues, Rubin later founded Danger Inc. Success achieved through a device called the Danger Sidekick. Originally, the device is named Danger Hiptop, but the market was known as T-Mobile Sidekick.

"We want to make a device, about the size of chocolate bars, with prices under $ 10 and can be used to scan an object and get information about it from the Internet. Then, add the radio and transmitter, be a Sidekick, "Rubin said about the Sidekick.

Currently, the Sidekick is already looking worn, but in his time, the Sidekick is an object which is at odds with the concept of technology that transcends time. The device, according to Rubin, the access of the data with phone capabilities. When it appeared on the market, the Sidekick must face the fact that the PDA market is being lost. However, Rubin asserted that the Sidekick is not a PDA.

Now, what Rubin said was not unusual anymore. Just look at Apple with millions of third-party applications that are present in the iPhone. Another thing that made Danger, which at that time was not yet thought of, is the bridge between handset makers with the network provider. Danger decided to share the profits with the T-Mobile Sidekick service. Thus, Danger does not rely on handset sales as the sole source of income, but also of services. This makes the device manufacturer (Danger) has the same objective with the seller (telecom operator T-Mobile).

company was bought by Microsoft. The giant seems to be interested to enter the mobile phone business with more aggressive again. The value offered was not half-hearted. According to reports circulating Microsoft bought Danger a price of $ 500 million. However, the purchase of Danger by Microsoft did not bring results flowery. The executive is left of Danger incorporated by Microsoft into the Mobile Communications Business, Entertainment and Devices division of. Then, they were asked to develop a mobile phone known as Project Pink. The target, this phone should be a rival iPhone and BlackBerry. According to Computerworld, Project Pink is a classic disease in a large company. Because the project is quite prestigious, he contested by several parties. And worse, the development of increasingly deviated from the desired. For example, the phone will initially be developed on the basis of Java, but then asked to use a Microsoft operating system.

Unfortunately, Windows Phone 7 that should be used for Project Pink, not yet ready. As a result, when it launched, the phone is finally called Microsoft Kin uses the Windows operating system for mobile phones are "old". A cold welcome any market making Kin eventually be closed, only a few months since its launch. Fate of the Sidekick service, which Microsoft inherited from Danger, and not too good. In one incident, which is still not known exactly what causes it, Sidekick customers suddenly lose all their data. One thing to note, all data on the Sidekick is stored 'in the cloud' (in this case that run on Microsoft's server and can be accessed via the Internet). Well, when the server was down, all Sidekick user data was lost.

In early 2002, Rubin was giving a lecture at Stanford on the development of Sidekick. Because, although sales of the Sidekick in the market did not explode, the device was considered good enough in terms of engineering. A coincidence that Larry Page and Sergey Brin, Google co-founder, was also present in these lectures. After the lecture, see Rubin to Page Sidekick up close look. Apparently, Page view, the device was using the search engine Google. "Cool," said Page. This is a starting point for the Page to the idea that in a few years later will be realized, a Google phone. Approximately two years later, Rubin has left Danger and try to do new things. These include trying to enter the digital camera business before he founded the Android.

Incubating Android Rubin when he became entrepreneurs-in-residence with venture capital firm Redpoint Ventures in 2004. "Android started from a simple idea, provide a powerful mobile platform and open so that it can encourage more rapid innovation and customer benefit," said Rubin. On July 2005, 22 months after the Android stands, the company was swallowed by the giant Google. Rubin also choose to join Google. When buying Android Inc.., Google does not mention in detail what price you paid and what to do with the company. In fact, Google said it is purchasing as an acquisition of human resources and technology alone. In addition to Andy Rubin, Google is making a lot of brilliant people from Android. These include Andy McFadden (WebTV developers with Rubin, and also the developer of Moxi Digital); Richard Miner (former vice president at the telecommunications company Orange) and Chris White (founder of Android and the display and interface designers WebTV).

Together with Google, Android given the extra power. Company from Mountain View, California that later formed the Open Handset Alliance to develop tools for Android.

"Google can not do everything. and we do not need it. That's why we formed the Open Handset Alliance with more than 34 partners, "said Rubin.

Android devices are present the market is not made by Google. Android heavyweight fighters including Motorola, Samsung, and HTC respectively cast their flagship Android phone to market.

"Just throw the software is not enough," Rubin explained, "you need a handset dikembanglan for this software and network providers who want to market it."

In the U.S., Motorola Droid so one weapon against Verizon Wireless AT & T with its iPhone. While the Nexus One, Google Android phone made by HTC, comes with no "official bond" on one particular operator.

Android's presence seems to try to shake the dominance of the mobile market in the U.S.. In Indonesia, Android also appears ready to be a prima donna after appearing in a tumult in Indonesia Celullar Show 2010.
"I know there will be a FUD (fear, uncertainty, doubt). However, we have seen some competitors to follow what we do. So it seems we are on the right path, "said Rubin.