Please Share this article is useful !
Arsene Wenger was born on October 22, 1949 in Strasbourg, France, Wenger became a professional soccer player for the first time in 1978. He came off as a defender to strengthen the club RC Strasbourg against Monaco. Wenger academic career almost smelled his career as a football manager.

He completed his undergraduate degree at the faculty of engineering and took a master's degree in economics from the University of Starsbourg. Wenger plenty to master a foreign language. In addition to his mother tongue, French, Wenger was able to speak the language fluently Alsatian, German, and English. In addition, he is also fluent in Italian, Spanish, and Japanese.

Then continue to the area of ​​managerial career. His first career as coach of the senior team is currently coached Nancy, where he joined in 1984. However, not much progress has been made by Wenger. Even Nancy had fallen to Ligue 2. His career began to rise when he concocted AS Monaco three years later. His career as the manager of AS Monaco looming when dealing in 1987. He brought Monaco topped klasement Ligue1 and won the league title in 1988. 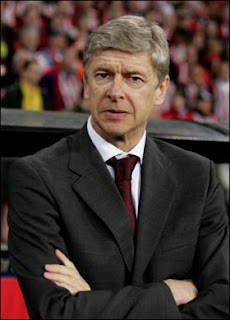 Wenger continued his success at the helm of the Japanese club, Nagoya Grampus Eight. He managed to present the Emperor's Cup, the national competition in Japan. He also managed to raise the position of the club from the bottom third of the league standings to second place.

Then, upon the recommendation of Gerard Houllier to David Dein in the summer of 2006, Arsenal agreed to appoint as the new manager of the club. His appointment took place on 28 September 1996, and the official Wenger handle the team since October 1, 1996. Wenger became the most successful manager in Arsenal's history, especially in terms of the championship trophy collection. He also became the oldest manager in charge of Arsenal. Wenger is the only manager not from England who won the doubles title in the UK, by doing so in 1998 and 2002.

Wenger is famous for its ambition to build a team that is not only able to win the game, but also can serve interesting spectacle. Teamwork is always a motto that he had never passed when training. The Times dubbed Wenger's side in season 2003/04 as the team that demonstrates the beautiful art of attack.

Wenger has a great reputation in concocting a casual player into a reliable and reputable. As with Monaco, he rake in Liberia George Weah players are not so audible echo. However, he went on to become World Player of the Year while with AC Milan FIFA. At Arsenal, he helped raise prestige players like Thierry Henry, Patrick Vieira, Francesc Fàbregas, Robin van Persie and Kolo Touré into a world-class player, do not be surprised if he was dubbed as "The Professor" by the Media

He was also a plus strategist economists. This is evident with the least expenses required for shopping Wenger player. Within a year, according to Arsenal chairman Peter Hill-Wood, Wenger just needs funds £ 4 million to £ 5 million. Remarkably, the player that he got a low price capable transferred to another club with a fairly soar. The most obvious example is Nicolas Anelka brought from Paris St Germain with just £ 500 thousand, which was then priced at a £ 22.3 million glanced at Madrid two years later.

Wenger has been criticized by many parties, especially the princes of English football because players rarely lose and played Queen Elizabeth's country of origin. Alan Pardew who was mesih gush West Ham said, Arsenal's success is not success of the British team. Wenger responded by pointing out, football is an art and not a mere passport.

He has been involved in a row a few times like when a war of words with Jose Mourinho and Michel Platini. In addition, Wenger has also been arguing with a line judge at the 2007 Carling Cup final. At that time he said the linesman a 'liar'. Because of him, Wenger was fined by the FA and ordered to pay a fine of £ 2500.