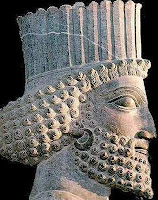 Year of birth Asoka exactly when is not known. It may well be approaching the year 300 BC, and he ascended to the throne around 273 BC. At first he followed the footsteps of his great-grandfather and trying to expand its territory through military action. In the 8th year of his reign he cleared a successful war against Kalinga, a country on the eastern coast of India (Orissa lies about today). However, once he realized how powerful the price that must be redeemed for victory, Asoka was struck inward. One hundred thousand people were killed, and hundreds of thousands of people were injured.

Depressed and feeling guilty, it is determined to stop the movement of military Asoka conquered India, and at the same time distanced themselves from aggressive actions, he became Buddhists and accept his philosophy, trying to practice the values ​​of "dharma" run errands containing truth, virtue and ketidakagresifan.

Create your own personal Asoka stop hunting and be "vegeterian" (do not eat meat except vegetables). In other important aspects of many humanitarian attitudes espoused. He founded hospitals and places of worship, issuing rules that ease for residents, building roads and advancing waters. Even Asoka specifically appoint government officials called "official dharma", in charge of telling the people to worship God, to develop a spirit of life-both fellow human kind. All religions have a place in the kingdom of the same. Tolerance Asoka seems obvious, though Buddhism gained favorable attention that religious growth. Buddhist emissaries sent abroad, and their mission to achieve great results, especially in Sri Lanka.

Asoka ordered chronicles the life and step kebijaksanannya written in poles or rocks scattered across the country. Many of these monuments can still hold up today. The placement of these monuments is geographically possible we get reliable information on the extent of power Asoka, and posts written on it is the main source of our knowledge of his career. Coincidentally, these poles are also considered to be a high level of art work.

Within fifty years after the death of Asoka, Mauryan Empire was falling apart and could never rise again. Meanwhile, through his support for Buddhism, Assoka long-term impact on the world itself becomes very large. When he ascended the throne, was very young Buddhist adherents, only local, known only in the northwestern part of India. However, when he died, believers are already covering the whole of India and its influence quickly spread to neighboring countries. More than anyone else - except Gautama himself - Asoka is a responsible for the development of Buddhism became the religion of the world....