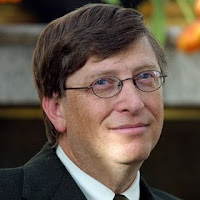 William Henry Gates III, better known by the name of Bill Gates was born on October 28, 1955, in Seattle, Washington. Bill Gates is the second child of three brothers. His father William Henry Gates was a corporate lawyer who had many relations in the city. While his mother Mary Maxwell an employee of First Interstate Bank, Pacific Northwest Bell, and members of the National United Way.

Bill's a smart kid, but he's too full of spirit and tend to often have trouble in school. When he was eleven years old, his parents decided to make a change in him and sent him to Lakeside School, a prestigious elementary school specifically for boys. In Lakeside that in 1968 Bill Gates for the first time introduced to the world of computers, in the form of a teletype machine that connected the phone to a computer time sharing.

He quickly mastered BASIC, a computer programming language, and along with his self-taught hacker in Lakeside, he spent time with the hours writing a program, play a game, and generally learn a lot about computers. "He was an eccentric," as one of his teachers gave Gates surname. Bill Gates taking lectures at Harvard University in Cambridge starting in 1975. There he met Paul Allen during school together. Together with Paul Allen, Bill Gates continues to develop his talents in the field of computer programming. However, Bill Gates ruled out (drop out) to donate her time to Microsoft.

Background Work
Through his efforts, the company he founded called Microsoft Corporation Bill Gates became successful and became a millionaire soar. In 1990 Bill Gates successfully released an operating system that is very successful in the world market. However, Bill Gates also got a bad reputation in his career. Not just once, even Bill Gates made several errors in the software business. In 1990 Bill Gates received demands from the United States Department of Justice on charges Gates has a monopoly on small companies. And once again Bill Gates tripped by law business law the United States in 1999. In 2000, Bill Gates stepped down from his position as Chairman of the Executive Employee and he chose to return to his old profession that he loved the Head of Research and Development Software at his own company, Microsoft Corp.. And in early 2008, Bill Gates decided to resign from Microsoft management and concentrate on philanthropic work through the charity he founded, the Bill & Melinda Gates Foundation.

Personal Life
In life peribadinya, Gates married Melinda French on January 1, 1994. They have three children, Jennifer Katherine Gates (1996), Rory John Gates (1999) and Phoebe Adele Gates (2002). With his wife, Bill Gates founded the Bill & Melinda Gates Foundation, which is a social foundation that regard pederita AIDS, scholarships for universities and concern for the third world. Critics say this is proof of the anger of many monopolistic practices, the company and some evil powers he has done, but some people close to Bill Gates said that he has long planned to donate most of his wealth. In 1999 the Washington Post reported that "Gates has stated that he decided to donate $ 5 billion to their organization. Thing it certainly is not surprising because, according to a survey by Forbes Magazine, Bill Gates has always been the richest man in the world during successive years from 1996 to 2004 the amount of $ 90 billion. With determination and hard struggle now Bill Gates has reached his goal. To achieve success it is necessary sacrifices and hard struggle, but hard work and never give up attitude Bill Gates has yielded results that he can enjoy this moment .

Want to know how rich Bill Gates does it? These facts are ..

5. Michael Jordan is the highest paid athlete who in America. If he does not eat and drink and keep his annual income ie U.S. $ 30 million, he'll have to wait 277 years to become as rich as Bill Gates is now.

6. If Bill Gates was a country, he would be the richest country the world's number to the 37 or so largest American company number 13, surpassing even IBM.

7. If all the money Bill Gates exchanged in denominations of U.S. $ 1, we can arrange a road from earth to moon, 14 times back and forth. But to make that road non-stop for 1,400 years, and use a total of 713 BOEING 747 planes to transport all the money.

8. Bill Gates is 40 years old. If we assume that he will live for another 35 years, he has to spend U.S. $ 6.78 million per day to finish all his money before he went to heaven.