7 Bizarre Man in the World


Please Share this article is useful !
Not all human beings are created in a normal and perfect as we have seen together. in some places we can find the strange humans weirdness beyond reasonable limits. The following 7 Man Bizarre World of diverse forms.
1. stephen taylor-the world's longest tongue

Sense of taste that usually we have at best only 5 to 6 centimeters long. Record for the longest tongue in the world is held by a man named Stephen Taylor British citizens. He has a long tongue 9.5 inches from the tip to the center of the tongue in your mouth closed state. Stephen get the title in the show 'Lo Show dei Record' in Milan, Italy on January 5, 2006 and to date no one has managed to break the record. 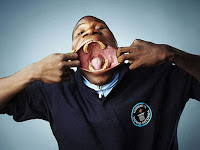 Francisco Domingo Joaquim from sambizanga in Angola has been awarded the title of man with the widest mouth in the world. Francisco Domingo Joaquim thus be confirmed as the man with the mouth and jaw widest in the world. man who is more popularly known by the name chiquinho participate in the contest the biggest mouth in the world, Rome Italy. It's hard to imagine a can of soft drinks can be included fully in the mouth of a man who was 20 years old. no half-hearted cans goes to the wide position
3. Mehmet Ozyurek | biggest nose in the world

In the competition "biggest nose" in the world in 2005, Mehmet Ozyurek of Turkey have recorded the biggest nose in the world with a record of 8.8 cm. Hidungya end it reached 3.5 cm
4.Kim Goodman-largest eyes in the world 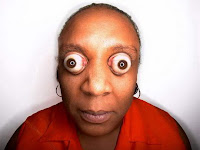 Her name is Kim Goodman. Kim Goodman is a woman who could pop his eyes out of the eye sockets by 12 millimeters (0.47 inches). He holds the world record for the farthest eyeball protrusion. He lives in Chicago, Illinois. He found his eyes appeared talent one day when he received a blow to the head with a hockey mask. His eyes jumped out farther than usual, and since that day she could pop them on cue, and also when he yawned.
5. Chenq Shiquin-longest hair in the world

Chenq Shiquin, originated from Guangxi Chinese women have hair with a long reach 18 fit (or approximately 6 meters) in 2004. he began to lengthen her hair from the age of 13 years. reportedly she has her own beauty salon. but nevertheless in still will not lengthen her hair for 16 years.
6. Greg Valentino | Worlds biggest biceps muscle 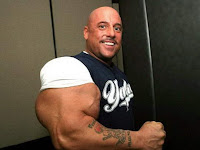 Greg Valentino is a bodybuilder who has the biggest bicep size in the world. He began weight training at the age of 14 years. Size bicepnya now reach 28 inches (70 cm), and he can do a bicep curl weight of 300 lbs (136 kg). Unfortunately, to get that big bicep, Greg has used many steroid. He admitted that in his column, "Ramblin Freak, the biggest biceps in the world", in the magazine Muscle Development.

uniquely strange and exciting to nickname him. how could his hands so large, so as to make the people around amazed with large hands. shaking hands is very visible so that the hands are very large.