Please Share this article is useful !
As we know Indonesia is composed of many tribes, each of which have less distinctive characteristics. Especially in the typical diet. So that it makes Indonesia has a wide range of specialties. Now we know even obliged to taste the typical foods homeland. Here are 7 famous Indonesian dishes. 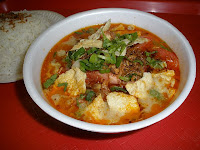 Soto Betawi is a popular soup in the Jakarta area. Just as soto soto Madura and eldest, soto Betawi also use jerohan. In addition to bowel, often other organs are also included, such as eyes, torpedo, and also the heart. Fried rice food made from rice fried with spices and other ingredients. Fried rice is a popular food in East Asia and Southeast Asia.

Rice is an important part of traditional Chinese cuisine, according to historical records already existed since 4000 BC. The fried rice and then spread to Southeast Asia brought by Chinese nomads who settled there and created a local typical fried rice based on differences in spices and how to fry. Fried rice actually comes from several properties in Chinese culture, who do not like cold food tasting and also a few days before the rest of the food. Hence, the cold rice and then fried to serve again at the dinner table. 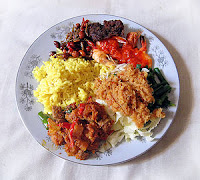 In the tradition of Indonesia rice color yellow symbolizes gold mountain meaningful wealth, prosperity and morality. Therefore yellow rice is often served at Thanksgiving events and happy events such as birth, marriage and fiance. In Balinese tradition, the color yellow is one of the four sacred colors available, in addition to white, red and black. Yellow rice therefore often used in ceremonial brass dish.

Pecel catfish (or Pecek catfish) in Indonesia is the name of a food made from catfish. Usually the question is dried catfish fried in oil and then served with tomato sauce and fresh vegetables. Ordinary vegetables consists of basil, cabbage, cucumbers and beans. Pecel catfish is an inexpensive and festive food. The food is very popular on the island of Java as an alternative to chicken dishes, especially fried chicken. 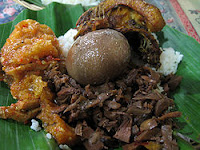 Gudeg (Javanese gudheg) is the typical food of Yogyakarta and Central Java which is made from young jackfruit cooked in coconut milk. It took many hours to make this dish. Brown color is usually produced by teak leaves are cooked together. Gudeg eaten with rice and served with thick coconut milk (areh), chicken, eggs, tofu and sambal goreng krecek.

There are many variants gudeg, among others: 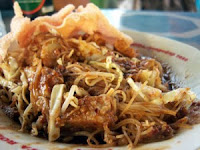 Ketoprak is one kind of Indonesian food using a diamond that is easy to find. Usually diamond sold using a stroller on the streets or on the sidewalk.

Its main components are know, rice noodles, cucumber, bean sprouts, and can also use boiled egg that comes with peanut sauce, soy sauce, and a sprinkling of fried onions. Can also be served with crackers or chips melinjo added. Several versions of some are included as a component tempeh. 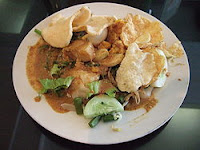 Gado-gado is one of the foods that come from Indonesia in the form of vegetables are boiled and blended into one, with a peanut sauce or sauce of crushed peanuts with sliced ??egg and fried onions sprinkled on top. Slightly fried chips or crackers (some are taking prawn crackers) are also added.

Gado-gado can be eaten just like a salad with herbs / peanut sauce, but can also be eaten with white rice or sometimes also served with rice cake.