✖
Home 7Top Ranking 7 Most Rare flowers in the World

7 Most Rare flowers in the World


Please Share this article is useful !
When the flowers were in full bloom, no one can deny anymore that how beautiful the world looks. Colorful beautiful flowers coupled with gorgeous flutter of butterflies flying around it to get the nectar will create a relaxing to the eye of the beholder. In this list we are going to see some tremendous interest, unfortunately, you probably rarely see these flowers in your everyday life. Because the flowers below is a flower so rare, threatened and endangered species in the wild habitat. Here's the list 7 Most Rare flowers in the World.

Flower Jade Vine is a rare flower that has a tropical rain forest habitat in the Philippines. Trees and flowers are members of the legume family and is closely related to kidney beans. This plant has a flower shaped like a claw that grows hanging from tree branches. The flowers alone can reach up to three meters in length. Flower color can vary from green to bluish-green mint. This species has proven very difficult to breed, and is considered a threatened species due to habitat destruction and the decline in natural pollinators.

Flowers with interesting shapes are found primarily in the tropical rainforests of Indonesia. This flower is one of the rarest flowers in the world's most endangered flowers as well as the largest flower in the world, this flower is known to reach a total width of over one meter. Rafflesia's survival is totally dependent on the specific subject of vines called Tetrastigma tree. Because the flower Rafflesia is a parasite that has no stems, stalks, leaves, and roots, flowers require the tree to get food. This flower is often called the corpse flower, because it releases the scent of rotting flesh was overpowering when in bloom to attract flies and beetles to aid in pollination. After blooming, the flowers will only last about a week before he died.

This species is very rare and only found on the high cliffs of Gibraltar. The plant is believed to be extinct outside Gibraltar in the 1980s but in Gibraltar there are still some remaining specimens can be found. Unfortunately, in 1992, all traces of these plants have vanished and finally declared extinct. In 1994 a single specimen was found by a climber on a cliff that can not be reached by him and have hope for the species back to life. The seeds are then propagated at the millennium seed bank and specimens are grown now at The Almeda Gibraltar Botanic Gardens and the Royal Botanic Gardens in London.

This tree is part of the tea family but is the only species in the genus and is a very rare flowering plants. Trees from Georgia's Altamaha River valley, has been extinct in the wild since the early 19th century. This beautiful tree can be found today thanks to Bartram family, who breed the trees and spread them before extinction occurs in the wild. Plants that have flowers that are white and fragrant when in bloom and the leaves turn a bright red color in the fall, is now a very popular ornamental plant. All existing examples of this tree today comes from one of the trees propagated by the Bartram. 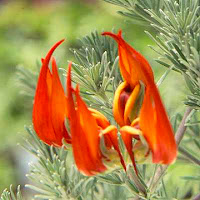 This beautiful flower has been classified in the category of endangered since 1884. This flower is believed to have actually been extinct in the wild. This amazing plants are plants that are endemic in the Canary Islands. Flower pollination is believed to be assisted by birds sunbird, long known to be extinct in the Canary Islands. This may help to explain the scarcity of this plant. Experiments have been conducted to find new pollinators for the flowers, in the hope that they can successfully re-introduced to the Canary Islands, but in 2008, no fruit was produced at all.

Flowers are dark red to brown is one species of the Cosmos, a native of Mexico. This interest has been declared extinct in the wild for over a hundred years. This species has managed to survive today as the single clone infertile, which was created in 1902 by vegetative propagation. The flowers are produced by this plant has a diameter of about 3-4 cm. These flowers have a vanilla scent that also makes a beautiful ornamental plants. 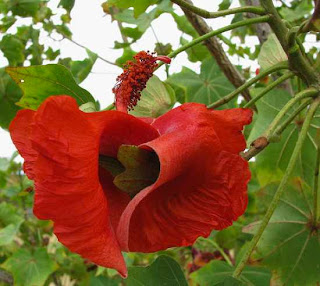 The tree is very rare endemic tree in Hawaii. This tree was discovered in 1860, at which time there were only three remaining specimens could be found. This tree proved difficult to breed, and in 1950, after the last seedling died, the tree was thought to be extinct. In 1970 the only surviving tree was found, which unfortunately was destroyed in a fire in 1978. Luckily one of the branches of the tree can be saved and the remaining successfully transplanted, and now there are 23 trees that exist today, all of which are located in various places in Hawaii. This tree is a small tree that grows to about 10-11 feet tall. The most striking of these trees are hundreds of bright red flowers that mature trees produce annually. Unfortunately, because of its rarity, only a few people are allowed to see it.