Please Share this article is useful !
Anwar was born in Medan, 26 Julai 1922. He grew up in a pretty mess. Both mother and father divorced, and his father berkahwin again. After the divorce, when finished high school, Chairil followed his mother to Jakarta. Childhood in Medan, Chairil very tight with his grandmother. Familiarity is so giving the impression to live Chairil.

In a rare life grieving, is one of the greatest pain when her grandmother died. Chairil portray grief in extraordinary poignant poem: Not really a stabbing death of heart / Keridlaanmu receive all arriving / No I know that high on dust / And grief almighty lord reigns

After the grandmother, the mother was the second woman Chairil puja. He even used to count his father's name, Sincere, in front of the mother, as a sign of the fate of the mother menyebelahi. And in front of his mother, Chairil often lose a wild side. Some poems Chairil also showed his love for his mother. 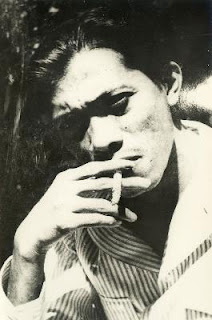 Since childhood, the spirit of the famous Chairil kedegilannya. A close friend Sjamsul Ridwan, never make a living writing about Anwar when as a child. According to him, one of the properties Chairil in childhood is defeated abstinence, abstinence both lost in a competition, and in getting his heart. Willingness and desire to get that causes his soul is always overflowing, burning, virtually never stands still.

Rakannya, Jassin also have fond memories of it. "We played badminton together, and he lost. But he did not admit defeat, and invites play continues. Eventually I lost. All that kerana we played in front of the girls. "

Women are the world Chairil after

book. Carrying the name of Ida, Sri Ayati, Girl Rashid, Mirat, and Roosmeini as the girl who chased Chairil. And all the girl's name even into poetry Chairil. However, the girl Falkirk, Hapsah, Chairil been married.

The marriage was not long-lived. Due to economic hardship, and Chairil lifestyle that has not changed, Hapsah asked for a divorce. When her son was 7 months, Chairil was a widower.

Shortly afterwards, at 15.15 pm, 28 April 1949, Chairil died. There are several versions about the illness. But definitely, chronic tuberculosis and syphilis.

Age Chairil is short, 27 years. But short it left a lot of things for the development of Indonesian literature. Instead he became the best example, for the attitude that did not mean it in the art wrestle. It is this attitude that makes her, Evawani Anwar, a notary in Bekasi, to apologize, when the death of his father, in 1999, "I am sorry, because I now live in a world of conflict with Anwar world."

Here is a poem by the famous Anwar titled "I AM"

Needless sobs that
I am the beast
Of herd wasted

Let the bullet penetrate my skin
I still inflamed crashing

Luka and I can take running
Run
Until lost poignant fairy