Please Share this article is useful !
Benefits of Guava Dersono for body 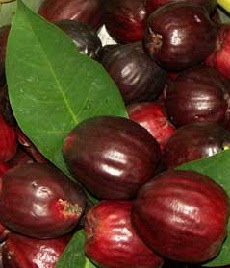 Benefits of Guava Dersono or also called Jambu Bol and Jamaican guava guava is a fruit tree jambuan relatives that had the texture of meat softer and more dense than the water pink. Not so clear why his name so as bol (Malay) or bool (Sundanese) means "ass".

In English known as the Malay apple, while the scientific name is Syzygium malaccense (which means: derived from Malacca) refers to any one region of its origin.

Bol guava fruit usually served as a table. Jambu bol, along with guava and guava or guava semarang utilization cincalo have more or less similar and interchangeable. The fruits are generally eaten fresh, or used as a salad ingredient. Various types of guava can also be set up or used as pickles. Because of the taste and aroma, guava bol generally preferred people and therefore the price is also generally higher than guava.

Benefits of Guava Dersono for skin

In addition to the skin, vitamin C functions as an antioxidant that has benefits for maintaining healthy cells, increasing the absorption of iron intake and improve sperm quality by preventing free radicals that damage sperm wrapping. In addition to being an antioxidant, vitamin C also has a function to keep and maintain the health of capillaries as well as the health of your teeth and gums.

Bark is used as a cure thrush. While wood is hard and redness quite well as building materials, as long as it does not hit the ground.

The origin and spread of Jambu Dersono

The origin of the fruit trees is not known with certainty, but jambu bol widely planted long ago in the Malay Peninsula, Sumatra and Java. Because of its benefits, guava bol is now grown in many tropical countries, including Caribbean countries such as Jamaica and Trinidad and Tobago.