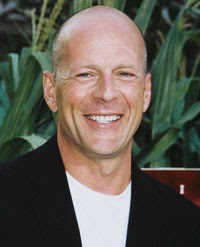 He became known in the hit TV series Moonlighting (1985-1989) and his role as John McClane in DIE HARD film series (1988). In late 1990, Willis had spawned a pop-blues album, The Return of Bruno, which includes its flagship single Respect Yourself.

He is an American actor and producer. His career dimiulai from the world of television in the 1980s and continued either on television or the big screen, beginning of the film - comedy movies, drama, and action.

In his personal history, Willis had married actress Demi Moore, despite their marriage ultimately failed, after surviving 13 years.

The actor who once played a character John McClane in the movie Die Hart has always been wowed at every action. No wonder that many people who admired him. For this time we review about the figure of the actor.