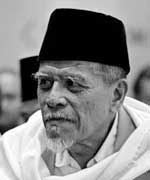 Buya Hamka was born in 1908 in the rural village of Molek, Reviewing, West Sumatra, HAMKA itself an abbreviation of his name that Haji Abdul Malik Karim Amrullah, Hamka is the son of Sheikh Abdul Karim bin Amrullah, who is also a cleric in the land minang, begins work as a religious teacher in 1927 at Plantation High Cliff, Medan and Padang Panjang religious teacher in 1929. Hamka then appointed a lecturer at the Islamic University, and the University of Muhammadiyah Jakarta, Padang Panjang from 1957 until 1958.

After that, he was appointed rector of the Islamic University, Jakarta and Professor Mustopo University, Jakarta. From 1951 until 1960, he served as High Civil Religion by the Minister of Religious Affairs of Indonesia, but resigned when Sukarno told him to choose between being public servants or political spicy Indonesian Muslim Shura Council (Masyumi). Buya Hamka is a figure of self-taught in many areas of science such as philosophy, literature, history, sociology and politics, both Islam and the West. With the Arabic language proficiency is high, he can investigate the work of scholars and poets in the Middle East such as Zaki Mubarak, Jurji Zaidan, Abbas al-Aqqad, Mustafa al-Manfaluti, and Hussain Haikal. Through the Arabic language as well, he examines the work of French scholar, English and German, he also diligently read and changed minds with famous figures such as HOS Tjokroaminoto Jakarta, Raden Mas Soerjopranoto, Haji Fachrudin, AR Sutan Mansur, and Ki Bagus Hadikusumo while honed his talent to become an expert speech reliably.

He also journalists, writers, editors, and publishers. Since the 1920's, Hamka a newspaper reporter a few pieces such as Pelita Andalas, Call of Islam, the Islamic star and Muhammadiyah call. In 1928, he became the editor of Progress Society. In 1932, he became editor and publishes the magazine al-Mahdi in Makassar. Hamka also been a magazine editor Community Guidelines, Panji Society, and Gema Islam. Hamka also produce works of Islamic scientific and creative works such as novels and short stories. Greatest scientific work is Tafsir al-Azhar and the novels that gets public attention and a book of literary texts in Malaysia and Singapore termasuklah Sinking Ship Van Der Wijck, Protection Under the Kaaba, and Merantau to Deli.

History of Islamic Ummah Volume 1, written in 1938 in installments until 1950.

The influence of the teachings of Muhammad Abduh in Indonesia (Speech in Cairo 1958), to Doctor Honoris Causa.

The answer to question 1960, copied from magazine essays GEMA ISLAM.

Islam and Spirituality, 1972; Crescent and Star.

Ideals of the Islamic state (public lecture) at Universiti Keristan 1970.

The history of Islam in Sumatra.

Liar in the World.