Biography of Carlos Slim Helu~Richest Man In The World


Please Share this article is useful !
Carlos Slim Helú (who was born January 28, 1940) is an Arab Lebanese-born Mexican businessman. He is the richest man in the world since August 2007, Fortune magazine and the Wall Street Journal. Forbes magazine put the name of Slim still ranks second to Bill Gates who is now his fortune at U.S. $ 58 billion. Slim self-reported wealth of $ 59 billion, including its holding company.

He is known as the number one affecting the telecommunications industry in Mexico and also in almost all of Latin America. He was in control of the company Telefonos de México (Telmex), Telcel and América Móvil. Slim also involves three sons namely Carlos Slim Domit, Marco Antonio Slim Domit and Patrick Slim Domit as head of the company. Slim's father, Julian Slim moved to Mexico from Lebanon at the age of 14 years. Julian is married with six children, and Carlos was their youngest child.

Slim name was taken from the middle name of Julian Slim, that Julian Slim Haddad. Haddad name itself is taken from the mother's middle name Julian Slim fit with the naming customs in Spain. Slim is the Universidad Nacional Autónoma de México in the engineering department and was married to Soumaya Domit in 1967. He was blessed with 3 children who until now worked at the company and is responsible directly to him every day. 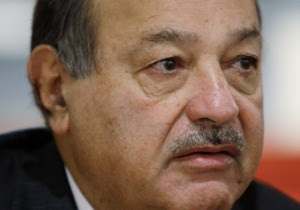 He was among the ranks of the principal officer of Altria Group (formerly Philip Morris)-resigned in April 1996 - as well as Alcatel. He was also a board ranks of SBC Communications until July 2004 that most of the time spent on the program World

Education & Development Fund, which focuses on infrastructure projects, health and education world. She also has a majority stake by Majority Shareholder of CompUSA. In 1997, many companies are not familiar with iMac network, and that's when Slim bought 3% of Apple computer company, whose value continues to soar in the next few years.

Slim also known as the man behind the development of the financial industry in Mexico, called the Carso Group, as well as other companies that CompUSA retail network. At the age of 28 he was named the Best Employers in Mexico. In addition, he also heads several leading companies such as Telefonos de Mexico, América Móvil, and Group Financiero Inbursa.

In 2000, he founded the Fundación del Centro Histórico de la Ciudad de México AC (Mexico City Historic Downtown Foundation), which aims to revitalize and rescue Mexico's city center has a high historical value as well as possible so that people have a better chance of survival as well as access entertainment that is more adequate in this historic area.

Additional, Slim also founded Latin America Development Fund project. This project alone has the funds to reach 10 billion dollars for the next year. Bill Clinton once said: "Carlos Slim is a philanthropist (people who like to do good) most important world most people have never known."