Please Share this article is useful !
Chad Meredith Hurley was born in 1977, he was the founder and former chief executive officer of YouTube a popular video sharing site. In June 2006, he was selected and included in the magazine Business 2.0 ranked number 28 as a list of "50 Who Matter Now". In October 2006 he and Steve Chen sold YouTube for $ 1.65 billion to Google.

Hurley worked at PayPal and eBay, one task was involved in designing the PayPal logo before starting YouTube career with colleagues Steve Chen and Jawed Karim. Hurley is primarily responsible for the tagging and video sharing field on YouTube.

Chad is the second child of Don and Joann Hurley, and grew up near Birdsboro, Pennsylvania. She has two siblings, an older sister, Heather, and brother, Brent. Since childhood, Chad showed extreme interest in art, but later became interested in computers and electronic media during high school. He was a high school standout at Twin Valley. He is also a member of Technology Student Association during high school. He graduated from Twin Valley High School and went on to receive a BA Fine Arts from Indiana University of Pennsylvania in 1999. 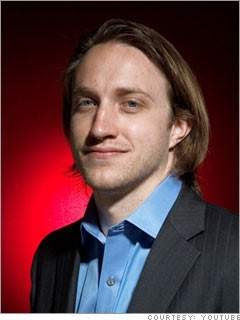 The other two YouTube founders Steve Chen and Jawed Karim, received 625,366 shares and 137,443 shares respectively valued at $ 326.2 million and $ 64.6 million dollars. The Journal reports based on Google's registration statement filed with the SEC on February 7, 2007. Hurley stepping down as YouTube chief executive officer in October 2010 and said he would remain as counsel of YouTube, Salar Kamangar allowing to take over the position of CEO. Hurley is married to Kathy Clark, daughter of Jim Clark an entrepreneur in silicon valley. They have two children ..