Please Share this article is useful !
Dahlan Iskan was born on August 17, 1951 in Magetan, East Java. He is the CEO of Jawa Pos newspaper and Jawa Pos News Network, based in Surabaya. He is also the Director of PLN since December 23, 2009.

On October 19, 2011, relating to the reshuffling of the United Indonesia Cabinet II, Dahlan Iskan was appointed as Minister of State-Owned Enterprises Mustafa Abubakar replaces ailing. Dahlan Iskan raised in view of the condition of the rural underprivileged. Her parents do not remember what date Dahlan born. Dahlan finally chose on 17 August for reasons easy to remember because it coincided with the commemoration of Indonesian independence.

Dahlan Iskan once wrote a book called Change Hearts (notes can be read on Personal Experience Undergoing Liver transplant) in 2008. This book is about penglaman Dahlan Iskan in liver transplant operations in China. Dahlan Iskan career began as a candidate for a small newspaper reporter in Samarinda (East Kalimantan) in 1975. In 1976, he became a journalist Tempo magazine. Since 1982, Dahlan Iskan lead Jawa Pos newspaper today. 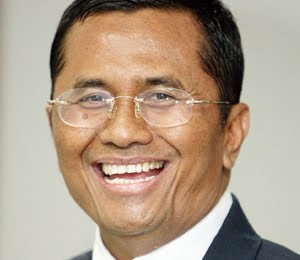 Dahlan Iskan is a figure that makes the Jawa Post, who was near death with a circulation of 6000 ekslempar, within 5 years of being a newspaper with a circulation of 300,000 copies. Five years later formed Jawa Pos News Network (JPNN), one of the biggest newspaper network in Indonesia, which has more than 80 newspapers, tabloids, and magazines, as well as 40 network printing in Indonesia. In 1997 he successfully established Graha Pena, one of the skyscrapers in Surabaya, and then a similar building in Jakarta.

In 2002, he founded a local TV station JTV in Surabaya, Batam TV followed in Batam and Riau TV in Pekanbaru. Since early 2009, Dahlan was a Commissioner of PT. Fangbian Iskan Corporindo (FIC), which will begin construction of Submarine Cable Communication Connection (SKKL) this summer. SKKL will connect Surabaya in Indonesia and Hong Kong. With a length of 4300 kilometers of fiber optic

Since late 2009, Dahlan was appointed managing director Fahmi Mochtar PLN replace the much criticized for his leadership during the power failure occurred in the Jakarta area. Since lead PLN, Dahlan made some breakthrough such as Indonesia byar pet-free in 6 months, everyday movements million connections. Dahlan also plans to build solar on 100 islands in 2011. Earlier, in 2010 PLN has successfully built PLTS on 5 islands in eastern Indonesia, namely Banda Island, Bunaken Manado, Derawan East Kalimantan, Wakatobi in Southeast Sulawesi, and Citrawangan. Aside from being the leader of Jawa Pos Group, Dahlan is also the president of two private power companies: PT Light Fajar Kaltim in East Kalimantan and PT Prima Electric Power in Surabaya.

On October 17, 2011, Dahlan Iskan appointed as successor of Minister of State in pain. He sniffed and moved so he was called to be the minister of state for his weight left PLN which he was at the peak of the spirit to reform PLN.