Please Share this article is useful !
Igor Sikorsky was born on May 25, 1889, in kiev (Ukraine), he was one of the pioneers and inventors of the helicopter. Igor is the youngest of five brothers. His father, Ivan Alexeevich Sikorsky is a professor of psychology, heredity Poland - Russia. Ivan was the son and grandson of the Russian Orthodox priest. Igor Sikorsky's mother, Mariya Stefanovna Sikorskaya is a doctor, igor loved art, especially in the life and work of Leonardo da Vinci and Jules Verne story.

In 1900, at age 11, he accompanied his father to Germany and through conversations with his father, he became interested in the natural sciences. After returning home, Sikorsky began experimenting with flying machines model, and at the age of 12, he had made a small rubber band-powered helicopter. Sikorsky began studying at the Naval Academy, Saint Petersburg, Russia, in 1903, at age 14. In 1906, he determined that his future lies in the technique, so he resigned from the Academy, despite satisfactory performance in the academy, and he left Russia to study in Paris. 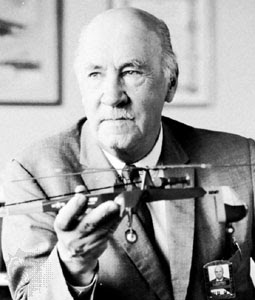 He returned to Russia in 1907, enrolling in the College of Engineering (Kiev Polytechnic Institute). Once the academic year, Sikorsky returned with his father to Germany in the summer of 1908, where he learned about the work of the Wright brothers, Sikorsky went on to say that: "In twenty-four hours, I decided to change my life's work, I will study the flight .."

With the financial support of her sister Olga, Sikorsky returned to Paris in 1909 to study aeronautics in Flight School "Ecole des Techniques et de Construction Automobile Aéronautiques (ETACA)" and buy aircraft spare parts. At that time, Paris was the center of the aviation world. Sikorsky met with aviation pioneer, and ask them to answer questions about aircraft and flying. In May 1909, he returned to Russia and began designing his first chopper, he started testing in July 1909. Despite progress in resolving technical issues of control, Sikorsky realized that the plane would never fly. He eventually dismantle the aircraft design in October 1909.

"I've learned enough to realize that the existing state of the art, machine, material, and of all of them ranging from lack of money and lack of experience ... I will not be able to produce a helicopter of my dreams"

In early 1912, Igor Sikorsky became Chief Engineer of the division plane to Russko Baltiisky Vagonny ZAVOD or R-BVZ in Saint Petersburg. His work in the R-BVZ including construction mesinm first four aircraft, S-21 Russky Vityaz, called Le Grand. He also served as experimenters first flight on May 13, 1913. In recognition of his achievement, he was awarded an honorary degree in engineering from Saint Petersburg Polytechnical Institute in 1914. Sikorsky took the experience of building the Russky Vityaz to develop the S-22 aircraft Ilya Muromets. Since the outbreak of World War I, he redesigned the bombers the world's first four-engine, which was decorated with the Order of St. Vladimir.

After World War I, Igor Sikorsky briefly became an engineer for the French forces in Russia, during the Russian Civil War. He Seeing little chance of him being an aircraft designer in the war in Europe, and especially Russia, later, he emigrated to the United States, and arrived in New York on March 30, 1919.

In the United States, Sikorsky first worked as a school teacher and lecturer, while looking for opportunities to work in the aviation industry. In 1932, he joined the faculty of the University of Rhode Island to form the Aeronautical Engineering program and remained with the University until 1948. He also attended the University of Bridgeport.

In 1923, Sikorsky Sikorsky Manufacturing Company established in Roosevelt, New York. He is assisted by several former Russian military officers. Among the supporters was Sergei Rachmaninoff Sikorsky, who introduced himself by writing a check for U.S. $ 5,000 or about $ 61,000 in 2007. Although the prototype was broken in the first test flight, Sikorsky persuaded supporters to invest $ 2,500. With additional funding, he produced S-29, one of the first twin-engine aircraft in the United States, with a capacity for 14 passengers and a speed of 115 mph. Performance of S-29, is slow compared to military aircraft in 1918.

In 1928, Sikorsky became a naturalized citizen of the United States. Sikorsky Manufacturing Company later moved to Stratford, Connecticut in 1929. and became part of the United Aircraft and Transport (now United Technologies Corporation) in July of that year. The company is producing airplanes, such as the "Clipper" 42-S, used by Pan Am for trans-Atlantic flight. 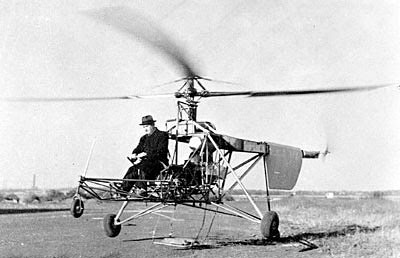 Meanwhile, Sikorsky also continued to work on the vertical flight before. On February 14, 1929, he filed a patent application for a "direct lift" for seaplanes. On June 27, 1931, Sikorsky filed another patent for a "direct lift aircraft", and was awarded patent number 1,994,488 on March 19, 1935 on the design rencanganya. and ultimately, the success of Sikorsky VS-300 leads to R-4, which became the first helicopter in the world of mass-produced in 1942. VS-300 finally by Sikorsky in the configuration using the rotor, which consists of a single main rotor and tail rotor antitorque single, and became one of the most popular helicopter models, the most widely used in the production and Sikorsky helicopters currently referred to as the inventor calls modern helicopter.

Sikorsky is married to Olga Fyodorovna Simkovitch in Russia. They divorced and Olga remained in Russia with their daughter and Sikorsky left for America before the October Revolution. Sikorsky married Elisabeth Semion in 1924, in New York, Sikorsky and Elisabeth then have four sons Sergei, Nikolai, Igor Jr. and George.

Sikorsky died at his home in Easton, Connecticut, on October 26, 1972, and was buried in Saint John's Cemetery in Stratford. Sikorsky has been designated a Connecticut Aviation Pioneer by the Connecticut State Legislature. Sikorsky Aircraft Corporation in Stratford Connecticut, to this day to be one of the world's leading helicopter manufacturer, and a small airport nearby has named Sikorsky Memorial Airport.