Please Share this article is useful !
Ir. R. Djoeanda Kartawidjaja or Ir. Haji Juanda was born in Tasikmalaya, West Java, January 14, 1911 Prime Minister of Indonesia was the 10th and last, be immortalized into a name of the airport in Surabaya Juanda airport Surabaya. He served from 9 April 1957 until July 9, 1959. After that he served as Finance Minister in the Cabinet Work I.

The largest donation in his tenure is Djuanda Declaration of 1957 which states that the sea, including marine Indonesia is around, between and within the Indonesian archipelago into a single entity known as the Homeland or designation as an archipelago in the law of the sea convention United Nations Convention on the Law of the Sea (UNCLOS)

Juanda is the couple's first child and Nyi Raden Kartawidjaja Monat, his father was a teacher at Mantri Hollandsch Inlansdsch School (HIS). Completed primary school education at his school and then moved to Europe for young people Europesche Lagere School (ELS), graduating in 1924. Furthermore, his father put into a special school that Europeans Hogere Burger School (HBS) in Bandung, and graduated in 1929. 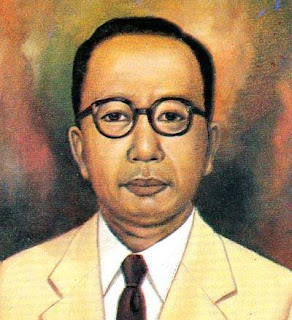 In the same year he entered the High School of Engineering (Technische Hooge School) now Institut Teknologi Bandung (ITB) in Bandung, majoring in civil engineering and graduated in 1933. During his youth Djuanda active only in the non-political organization and a member of the Association Pasundan Muhamadiyah, and was head of Muhammadiyah schools. Lived next career as an employee of the Department of Public Works West Java, Dutch East Indies since 1939.

Ir. H. Djuanda a state servants and public servant. He was an exemplary public servant. Career in various positions devotion to the state and the nation. Since graduating from the Technische Hogeschool (1933) he chose to serve in the community. He chose to teach at SMA Muhammadiyah in Jakarta with a potluck salary. In fact, at that time he was offered a teaching assistant at the Technische Hogeschool with higher salaries. After four years of teaching at SMA Muhammadiyah Jakarta, in 1937, served in government service Djuanda Jawaatan Irrigation in West Java. In addition, he was also active as a member of the Regional Council of Jakarta.

After the proclamation of August 17, 1945, exactly on 28 September 1945, Juanda led the youth took over the Railway Bureau of Japan. Followed takeover Mining Bureau, Township, Residency and military objects in North London Warehouse. Then the GOI lifted Djuanda as Railway Surgeon in Java and Madura. After that, he was appointed as Minister of Communications. He also has served as Minister of Water, Wealth, Finance and Defence. Several times he led the negotiations with the Dutch. Among the RTC negotiations, he acted as Chairman of the Economic and Financial Committee of the Indonesian delegation. In this RTC negotiations, the Dutch recognized Indonesian sovereignty of the government.

Juanda had captured Dutch soldiers at Military Aggression II on December 19, 1948. He was persuaded to be willing to participate in the government of the State Pasundan. But he refused. He was a man of the country and the people who worked beyond the call duty. Able to face the challenges and find the best solution in the interest of the nation and the country. The most strategic work of devotion is the Declaration Djuanda December 13, 1957.

Ir. Djuanda by the press dubbed 'marathon minister' because since the beginning of independence (1946) has served as a junior minister of transportation to become Prime Minister and Minister of Defense (1957-1959) to become the First Minister during Guided Democracy (1959-1963). So that from 1946 until his death in 1963, he served once as a junior minister, 14 times as a minister, and so serving Prime Minister. He is a leader who is flexible. In some ways he sometimes disagreed with the President and other political figures.

His name is immortalized as the name of the airport in Surabaya, East Java Juanda airport for his services in the fight for the construction of the airstrip so it can be done. It is also dedicated to the name of the great forest in Bandung Forest Park Ir. H. Djuanda, in this park are Museum and Monument Ir. H. Djuanda. Djuanda died 7 November 1963 in Jakarta due to heart attack and was buried in TMP Kalibata, Jakarta. Based on Presidential Decree No.244/1963 Ir. H. Djuanda Kartawidjaja appointed as a national leader / hero of national independence.