Biography of Jack Dorsey - Founder and Inventor of Twitter


Please Share this article is useful !
Jack Dorsey, born in St Louis, Missouri on 19 November 1976, was one of three founders of Twitter that Biz Stone, Evan Willliams, and Jack Dorsey himself. when he was only 24 years old, the idea is simple dibenaknya to change the way of communicating socially, an idea that eventually turned into what we now know as Twitter. , He had already shown an interest in software development at the age of 14 and was to create open source software applications related to taxi and courier delivery route.

After college at the University of Missouri and in New York, he moved to California. At that time, instant messaging really began exceptional, with AOL Instant Messenger service that is very popular. Dorsey saw this and wondered if he could combine the ideas initially to provide messaging services status. "What if you can share your status with all of your friends really easily, so they know what you're doing, but you do not want to have to write a whole blog entry or Live Journal entry?" 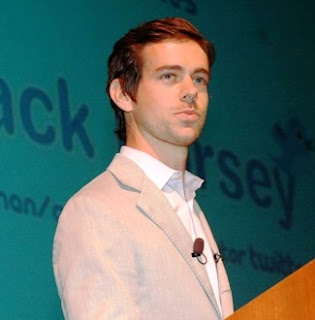 Over time and Jack was busy working on a web-based delivery solution, he considered whether SMS text messages can be incorporated into the concept of interactive status messages. Then Evan Williams, a former Google executive, providing investment funds and together with Dorsey and Stone for operational twitter, Inc. In early 2006, they were ready, but did not really have an active strategy of launching.

In August 2006, Twitter was born, this Unlike microblogging service blog service such as Blogger, WordPress and Multiply, Twitter has a limit of 140 characters per post - therefore called microblogging. When writing activities undertaken by the bloggers now have their own verb that blogging, as well as the activities performed by users of Twitter