Please Share this article is useful !
John S.Pemberton who was called Doc was a pharmacist living in Atlanta, Georgia, United States. Born in Knoxville, Georgia in 1831, but he spent his childhood in Rome, Georgia. He developed many patent medicines recognized by the public usefulness. He found the formula of Coca-Cola on May 8, 1886 in Atlanta, Georgia, United States.

After completing his studies at Southern Botanico Medical College of Georgia in 1850, Pemberton made a book about "Samuel Thomson` s Complete System of Practice ". In 1855, Pemberton received his pharmacy medicine from the University of Philadelphia. Later, he moved to Columbus Georgia, with his wife Anna Eliza Clifford Lewis and his son Charles Ney Pemberton.

Before finding the formula of Coca Cola, in May 1862 Pemberton had a career in the military with the rank of lieutenant in the unity of the army. As the squad leader, he was responsible for keeping the town. Even in war, Pemberton was shot in the chest.

After a five-year career in the military, worked as an assistant to Dr. Pemberton. Austin Walker, a psychologist. During the work, Pemberton invested all the proceeds for research and development in the field of rights of ownership of the goods or products, such as perfume oils and traditional medicines. In 1869, Pemberton moved to Atlanta Georgia, to build his business career. In the city of Atlanta, he managed to create and sell beverages containing alcohol French Wine Coca. 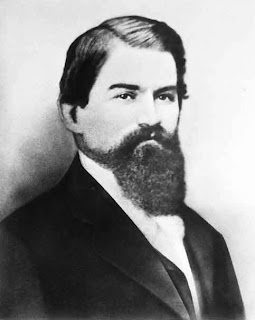 However, the drinks business that gives a lot of income that does not run smoothly. Since Atlanta has prohibited the use of alcohol in 1885, Pemberton had to swap the French Wine Coca formula by removing the word French Wine. Since forbidden, cocaine is no longer the main content of Coca Cola, but was replaced with caffeine, sugar, citric acid, starch and oil fruits are allowed. Coca Cola formula is still a secret stored neatly.

Together with his colleagues who take care of finances, Frank Robinson, Pemberton made fresh drinks that can be enjoyed a lot of people. He concocting drinks French Wine with added sugar, citric acid, starch and oil fruits into the drink. Finally, Coca-Cola created the now popular as carbonated soft drinks in a short period.

For the main ingredient, Pemberton had to find and collect seeds cola plant native to tropical regions of West Africa and the tree coca leaves from South America. The process of drying coca leaves and cola nuts done manually. Pemberton makes the business successful refreshments. Potion materialize as he had hoped. Then, Robinson suggested the name Coca-Cola for the potion which was immediately accepted by Pemberton. Coca Cola formula subsequently by Pemberton was named "Merchandise 7X", or abbreviated M7X and highly confidential.

In marketing this beverage products, Pemberton and Robinson had to fight hard. They are sold in jars and carried around the city using a cart horse. In fact, they have to sell for free to introduce Coca Cola. Despite getting good response from the public, but the income is not increasing. In the first year, sales of Coca Cola only sold about 50 million U.S. dollars. Meanwhile, Pemberton was determined if this potion must be widespread and can be enjoyed by all people around the world.

After a year of fighting for his creation, Pemberton realized that he was an inventor. Later, he was thinking of selling this herb in the right people who can develop appropriate dreams. Then he went to Asa Candler, a child's well-known merchant of Atlanta, whom he knew well. He sold the patent rights to manufacture Coca Cola U.S. $ 2,300 price.

After getting the concoction, Asa Candler trying to process the findings of Pemberton. After work, Candler store at attractive containers to invite buyers, the urn bearing the Coca Cola. Not only that, Candler also put up banners reading "Selling Drink Coca Cola" in front of the drug store dr. Joseph Pharmacy. In just a few hours of the drink sold. Asa Candler in 1889 by Joseph Jacob's Pharmacy store sells Coca Cola for the first time.

In 1892, Candler decided to form The Coca Cola Company, Atlanta in Georgia with their relationships. A year kemudain, 1893 Candler patented Coca Cola as a trademark. Coca Cola soft drink is not actually the first in the United States, but when it got patent Coca Cola became the main beverage sold in the Soda Fountain, store soft drinks, ice cream, and so on. Dr. John Stith Pemberton died in 1888, at age 58, not long after selling the potion. Now, the findings are still enjoyed by the people in the world. Coca Cola now become a cultural symbol of the United States.