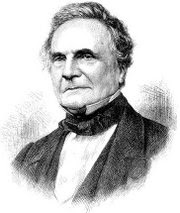 Charles Babbage was born December 26, 1792, the area now known as Southwark, London, the son of Benjamin Babbage, a Banker. The surplus in mathematics is very prominent. As he entered Trinity College at Cambridge in 1811, she found that her math skills are much better than even the tutor sendiri.seorang British mathematician who first put forward the idea of ​​a programmable computer. Part of the development machines can now be seen at London Science Museum.

At the age of 20 years Babbage worked as a mathematician, especially in the field of calculus functions. In 1816, he was elected as a member of the "Royal Society" (science and academic organizations independent United Kingdom, is still active today) and play an important role in the foundation "Astronomical Society" (organization Astronomy and geophysics Britain, is still active to this day) in the year 1820. At this time became interested in Babbage's calculating machine, which continued until his death.

In 1821 Babbage created the Difference Engine, a machine that can sort the table Mathematics. When the machine is complete in 1832, Babbage get an idea about a better engine, which will be able to finish not just one type, but different types of arithmetic operations. This machine called the Analytical Engine (1856), intended as a general symbol pemanipulasi machines, as well as having some of the characteristics of the modern computer. Among them is the use of punched cards, a memory unit to enter numbers, and other basic elements of the other computer.

Babbage's work less well until one day he met with Ada Countess of Lovelace, daughter of Lord Byron. Babbage first met at an event on June 6, 1833. Nine years later, Luigi Federico Manabrea (an engineer from Italy) described how the Analytical Engine. This work was later translated and added notes by Ada

Lovelace in 1843. From the time people began to recognize the work of Charles Babbage.

In 1937, Babbage writing to the attention of Howard H. Aiken, graduate degree from Harvard. Aiken are also trying to complete the design of computer machines, moved by the idea of ​​Babbage. In collaboration with IBM, Aiken could make the Mark I, the first computer for any purpose. Two years after Mark I operated (1946), a group of engineers and other inventors completed the ENIAC, the first electronic calculator. Since then, advances in computer technology is growing rapidly.

Calculating machines had so much influence in the world, will become even more important in the future, their contributions to the development of the Babbage computer Aiken is not greater than or than John Mauchly and JO Eckert (the main character in the design of ENIAC). On that basis at least three predecessor Babbage (Blaise Pascal, Gottfried Leibniz, and Joseph Marie Jacquard) has made a donation equivalent to Babbage. Pascal, a mathematician, philosopher and French scientists discovered the sum of mechanical engineering in 1642.

Years 1828 to 1839, Babbage medapat title Lucasian chair of mathematics the (title of professor of mathematics most prestigious in the world) from the University of Cambridge. In addition to calculating machines, Babbage also provides various other contributions. These include creating a modern postal system in England, compiled the first table a reliable insurance, find a locomotive cowcather (triangular structure in front of the train, which is able to clean the rails of the disorder), and several others. Besides Babbage also contribute their ideas in economics and politics.

Charles Babbage was also an expert in cryptanalysis that broke Vigenere cipher (polyalphabet cipher). Cleverness is actually already owned since 1854, after he managed to overcome the challenges to solve ciphernya Thwaites. However, these findings are not published so that he only discovered in the 20th century when scientists examine notes-notes (text, notes) Babbage.