Please Share this article is useful !
David Villa Sánchez was born in Oviedo, Asturias, Spain, December 3, 1981, he was given the nickname El Guaje (The Kid in Austrian) David Villa started his career in 1991, joined the club UP Langreo. In 1999 he moved to the professional club Sporting De Gijon.

In 2003 he moved to Real Zaragoza promotion team. Together Zaragoza he did not have any problems in adapting with the other players and he created 17 goals in his first season with Zaragoza.  played two seasons with Zaragoza he was transferred to a big club Valencia in the summer of 2005 with a price tag of 12 million euros. 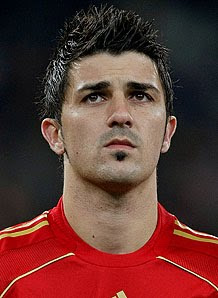 2005-2006 season he became top scorer for Valencia with 25 goals from 35 games, where he lost 1 goal from Samuel Eto'o of Barcelona's top scorer in Laliga. He scored a hat-trick for Valencia against Athetic Bilbao on 23 April 2006. Earlier on March 14, 2006 Villa Valencia to extend the contract through 2013. Since 2010 until today, David Villa playing for Barcelona.

For the Spanish national team debut against San Marino in February 2006, he was part of the team squad Luis Aragones with Fernando Torres and Raul Gonzalez. He also became part of the 2006 World Cup Championship in Germany, bertandem with Fernando Torres in the first game against Ukraine, he created two goals (one from the penalty spot). At the 2008 European Cup Championship, Villa became Spain hero in the preliminary round with a collection of four goals. Hat-trick when he printed La Furia Roja crushed Russia 4-1.

One more goal from the 26-year-old player comes time to bend Spain Sweden 2-1. In the third group stage match against Greece, Villa did not go down and therefore not scored. Starting the quarterfinals to semifinals, his goal production stalled. Against Russia in the semifinals, he even played 35 minutes before being replaced by Cesc Fabregas. Top party Euro 2008 between Germany versus Spain at Ernst Happel held. 'Tim matador' eventually became the European champion in 2008 after a 0-1 win over Germany