Childhood (1809-1824)
Since Hamburg occupied France, in 1811, Mendelssohn family moved to Berlin, where grandma Felix Mendelssohn lived. In Berlin Felix and Fanny got a musical education from their mother, who became a disciple of Johann Philipp Kirnbergers studied music Johann Sebastian Bach. Fanny and Felix in 1816 to Paris and got music lessons from Madame Bigot. After returning to Berlin, two sisters studied composition and piano playing. 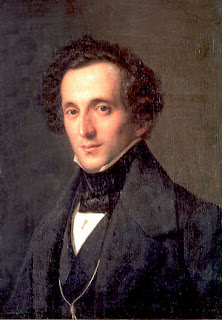 Felix Mendelssohn performed in public for the first time at the age of nine years, by playing the piano in chamber music concerts or chamber music, on October 24, 1818. In April 1819 he appeared as a singer in the school singing Sing-Akademie in Berlin. In 1820, when she was just 11 years old, Felix Mendelsohn began composing. Within a year he wrote nearly 60 works of music, including a number of songs, sonatas for piano, a piece of music for a trio consisting of two strings and piano, a sonata for violin, a piece of music for organ and even opera consisting of three section. These works were followed by larger works in the year 1821.

In 1821, at the age of 12 years Mendelssohn for the first time met the famous German writer, Johann Wolfgang von Goethe (1749-1832). He stayed at the home of Goethe in Weimar for 16 days. Meeting with Goethe was impressive to Mendelssohn, and the beginning of their friendship. Mendelssohn in 1822 is much more productive than in previous years. As a child, Felix Mendelssohn and his brothers have always held a small show at the home of their parents, every Sunday morning. Felix became the leader, while Fanny plays the piano, singing Rebecca and Paul plays the cello. Felix also wrote short works for this occasion.

Adolescence (1825-1829)
In 1825, Felix joined his father, Abraham Mendelssohn to Paris. In the big city, he met with two leading composers of his era, the Rossini and Meyerbeer. He was also acquainted with the composer Luigi Cherubini, who admired his talent. But from his letters seems clear that Felix does not like French classical music, but he started a friendship with some people, who had been building for years.

Month May 1825 Felix returned to Berlin with his father. On the way home he stopped at Weimar and Goethe visited for the second time. At home he plays his Goethe called Quartett in b-Moll, who dihadiahkannya to Goethe. Upon arriving back in Berlin, Abraham Mendelssohn took his family moved into an old house and a big way Leipziger Straße in Berlin. At home for the first time played the first part (Ouverture) from Felix Mendelssohn's work entitled Sommernachtstraum, or dream of a summer evening, a comedy-drama based on the work of British poet William Shakespeare (1564-1616), titled A Midsummer Night's Dream. This composition is the work of Mendelssohn's most famous in the world. This composition scores marked with the date "Berlin, August 6, 1826". At the time of composing this awesome Felix Mendelssohn was just 17 years old.

In addition to writing musical works, Mendelssohn was also enrolled at the University of Berlin. He was among others attended the lectures of the famous philosopher Georg Wilhelm Friedrich Hegel. In addition, Mendelssohn also founded a choir that specifically studied and mempagelarkan works by Johann Sebastian Bach. Before revived by Mendelssohn, the works of renowned German composer is virtually unknown in his own country.

Journey Concert First (1829-1832)
Felix Mendelssohn April 1829 for the first time to travel to London, where he was greeted with enthusiasm. His first appearance in front of the British public is in a Philharmonic Society concert orchestra, where he acted as a conductor. Dated June 25, 1829 he played for the first time in the UK Ouverture from Sommernachtstraum. After the concert, Mendelssohn inadvertently left scores of his work was in a hackney coach. Upon returning home, he wrote back the work and produce the perfect coffee, was entirely based on memory.

After a series of concerts, Mendelssohn went on a trip to Scotland, where he got the inspiration for his work entitled Hebriden-Ouverture and Schottische Sinfonie or Scottish Symphony. End of November 1829 he returned to Berlin. In May of 1830, Mendelssohn traveled to Italy. On the way he stopped two weeks and visited Goethe in Weimar.

On the way back from Rome, in October 1831 he stopped at Munich, where he wrote a work for piano entitled Klavierkonzert g-Moll. After stops in Stuttgart, Frankfurt am Main and Düsseldorf, Mendelssohn eventually went to Paris and met people he knew during his visit in 1825. When he was closely related to two other well-known composers of Europe, namely Franz Liszt and Frédéric Chopin. Dated February 19, 1832 and the first part Sommernachtstraum number of other works displayed at The Conservatoire. But not all of his work got rave reviews. Are then forced to cut short his trip because he contracted the disease Cholera. Month March 1832 Mendelssohn returned to Berlin. Mendelssohn recovering from cholera in a short time. On 23 April 1832 he visited again to London. He led a number of concerts and published the first part of a collection of songs, entitled Lieder ohne Worte or songs without words. In July 1832 he returned to Berlin.

Period 1832-1835
Felix Mendelssohn decided not to work permanently in any position for several years. Early in 1833 he returned to London. This time he led his concert entitled Italienische Sinfonie or Italian Symphony. Dated May 26, 1833 he played the work in a music festival in the city of Düsseldorf, Niederrheinisches Musikfest. The concert was very successful, so the city government immediately offered the position of director of the Düsseldorf city music. The position includes a number of tasks, which leads the largest church in all of music, in theater and in two theaters.

Before taking that position, Mendelssohn returned to London with his father, and returned to Düsseldorf on 27 September 1833. His work in the church and the concert went well, but the relationship with the manager of the theater did not go smoothly. Chances for that reason prefer the Mendelssohn later church music rather than opera. In Düsseldorf he started writing the first religiously motivated work under the title of Paul's Oratory, which tells the life of the apostle Paul. The position of director of music in Düsseldorf may be retained longer, if only he had not received an offer to become the permanent leader of the Gewandhaus concert hall in Leipzig.

Leipzig (1835-1841)
August 1835 Mendelssohn moved to Leipzig and led the first concert on October 4 that plays a work entitled Meeresstille und glückliche Fahrt or calm sea and a happy journey. Compared to other works, the composition is now less favored people. Concerts in the Gewandhaus received great praise, so he was awarded honoris causa in philosophy dated March 20, 1836.

Year 1837 was very happy for Felix Mendelssohn. Dated March 28, 1837 he married Cécile Charlotte Sophie Jeanrenaud. He was acquainted with Cécile in Frankfurt am Main in the summer 1836. From his marriage Mendelssohn had five children. The days have long passed their honeymoon when he got a call back to the UK, where he had to lead a concert of Paul's Oratory in Birmingham music festival. In the course of this time he played the organ in church St. Paul and Christ Church. In that game, he instilled a great influence on the organic-organic UK. In England he began planning the next oratory, called Elias.

Last Years in Leipzig
Mendelssohn in his workspace at LeipzigBildunterschrift: Großansicht des Bildes mit der Bildunterschrift: Workspaces Mendelssohn at his home in Leipzig In 1843 Mendelssohn founded the first high school musical in Germany, at the Leipzig Conservatory, which was inaugurated on April 3 at the theater Gewandhaus. In the same year he was made an honorary citizen of Leipzig. In 1844 he led a number of symphony concerts in London and plays music from his Sommernachtstraum.

After a brief visit to Frankfurt am Main, September 1845 Mendelssohn returned to Leipzig. He returned carrying out their duties and teaching at a high school musical. Dated August 26, 1846 his work at the festival Elias dipagelarkan Birmingham Oratory and received very enthusiastic. He returned to Leipzig and back to work as usual. But his health began to fail. Mendelssohn in 1847 to travel to the tenth and last to England, which is to lead the Elias Oratorim game at Exeter Hall, in Manchester and Birmingham.

After returning from England, news of the death of his sister Fanny a blow to Felix Mendelssohn. He withdrew from the general public, as well as a vacation for months in Switzerland and Southern Germany. On October 28 he suffered a stroke in Leipzig. After the second stroke on November 3, Mendelssohn was in a coma and died a day later, at the age of 38 years. His home on the road Goldschmidtstrasse 12 in Leipzig is now a museum Mendelssohn-Haus, and became one of the historical places in Germany.