Please Share this article is useful !
Fernando José Torres Sanz or Fernando Torres was born in Madrid, Spain, March 20, 1984, he became interested in playing football as a child and joined the first time with Parque 84 when she was 5 years old. His grandfather was not too fond of football, but very proud to Atlético Madrid supporter, and Torres also inherit a supporters club of the city of madrid. Torres actually wanted to be a goalkeeper, as his brother. However, at the age of seven, he began playing as a striker in an indoor league in the neighborhood besama club, Mario's Holland.

Three years later, when he was 10 years old, he started playing the real football with Rayo 13. After a charming appearance with his new club, where he scored 55 goals, Torres was one of three Rayo 13 players who try to play with Atlético Madrid. He wowed scouts and at 11 years old, he joined the club in 1995.

In 2001, Torres entered the major team Atletico Madrid.Dimana who previously played in Atletico Madrid B, Fernando Torres made his debut against Leganes team. Then, starting his first goal against Albacete. First season with Atletico Madrid. Printing only 6 goals from 36 games is doing it, but his team could be promoted to La Liga, not only was the Atletico Madrid managed Champions League Adelante, and Runner-up Copa Del Rey. Fernando Torres also had been interested in Sevilla striker crisis. 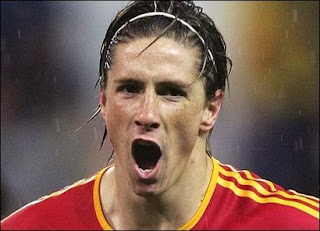 Torres rejected the proposal, playing in La Liga. Achieving fantastic Torres, 18-year-old has been a mainstay of Atletico Madrid, from 31 games with Atletico Madrid to score 22 goals. Torres became the icon of Atletico Madrid, which is where Torres pledged allegiance. Sticking Fernando Torres made his team ranked 6th in the standings. Torres also scored important goals against La Liga giants. Example: when Atletico Madrid hold Valencia at home by a score of 1-1, against Real Madrid team had excelled despite losing at Santiago Bernabeu ended 2-1.

Against Barcelona in which Torres scored two goals while only narrowly lost 3-2 at Camp Nou. The most fantastic Salto Goals scored against giants Sevilla at home 2-2 despite restrained. Barcelona were defeated at home by two goals without reply Torres. Against Valencia, Torres proudly hatrick with a score of 4-1. Against Real Madrid at home should be restrained from 2 to 2.1 torres goal through his head was a 2-1 win over Real Madrid. Sevilla to conquer the mighty Atletico Madrid at the Ramon Sanchez Pinzjuan, with a 3-1 score, Torres Goals are very beautiful with Banana shot techniques that can not hold Andres Palop. Torres promise the faithful should ask for her hand broken as Liverpool in 2007, at a price of 37 million euros.

Torres joined a club that won 18 times Premier League is Liverpool. Torres was proud to join giants. Torres made his debut with a 2-1 win over Aston Villa. And he played in the first League Championship against Toulouse in the group phase with a 1-0 win. Goal debut occurred when fighting giants Chelsea despite winning 1-0 through goals Torres, unfortunately stranded 1-1.Hatrick Torres first occurred against Reading 4-2. Torres also won the Young Player Of The Week.

He scored his first goal in the League Championship when Porto in Liverpool gunduli 4-1.Torres become icons of Liverpool where Torres vowed not to move from Liverpool. Torres had also won the Premier League Player Of The Month in February. His first season with Liverpool ended up with 20 goals for Torres in the Premier League. Torres could be a candidate PFA Players' Player of the Yearwalau finally chosen Cristiano Ronaldo.

On January 27, 2011, Chelsea's £ 40 million bid for Liverpool, but was rejected. Torres then apply for a transfer to Liverpool the next day which was also rejected. Torres later joined Chelsea with five and a half year contract period, on January 31, 2011, with the transfer fee reported £ 50 million. Torres Transfer is a transfer record for the largest in the history of the United Kingdom.

Torres made his debut for Chelsea's 0-1 home defeat by his former club Liverpool, on February 6, 2011. On 23 April, Torres scored his first league goal for Chelsea in the 3-0 home win over West Ham United, which also means an end to "fasting goals" in its 903 minutes.

He also played in Spain and made his debut for the senior team during the match against Portugal in September 2003. Seven months later he scored his first goal for Italy. Torres has been playing with the Spanish national team in three major tournaments; Euro 2004, World Cup 2006 and Euro 2008. Torres failed to score for Spain dala Euro 2004, but he scored 3 goals in the 2006 World Cup. Torres scored the only goal in Spain's victory in the Euro 2008 final against Germany with a score of 0-1.