Please Share this article is useful !
Ferruccio Lamborghini was born on 28 April 1916. He is the founder of the Italian car company Lamborghini, he is a son of Antonio and Evelina Lamborghini viticulturists, at home numbered 22 in Renazzo in Cento, in the region of Emilia-Romagna in northern Italy.

According to his baptismal certificate, he was baptized four days later, on May 2 Lamborghini youth interested in agricultural machinery and not farming lifestyle itself, and he studied engineering at Fratelli Taddia.

An educational institute near Bologna. in 1940, he recruited Italian Royal Air Force, where he served as a mechanic on the island of Rhodes region since 1911 part of the kingdom of Italy, after Italian-Turkish war, he became head of vehicle maintenance unit. Lamborghini imprisoned when the island fell into the hands of England at the end of the war in 1945, and did not get home until 1946. 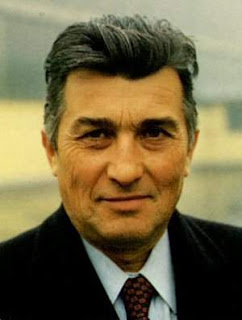 He married, but his wife died in 1947 while giving birth to her first child, a boy named Antonio. After the war, Lamborghini opened shop in town Pieve di Cento. In his spare time, Lamborghini modify a Fiat Topolino that has long been bought. Myth says, Ferrucio Lamborghini desperate to make the car as upset with Ferrari founder, Enzo Ferrari. Not upset at not being able to compete with Ferrari. Precisely Ferrucio originally collector cars Ferrari.Suatu when Ferrucio was discovered in the car Ferrarinya.Dia problem immediately report the matter directly to the Enzo.

Unfortunately, it refused to meet with Enzo Ferrucio. The father of Dino Ferrari was even told Ferrucio walk alone if you do not like the car makes. Disappointed with the arrogant response, Ferrucio was moved to make a car. In his mind, he wants to know is how do I make the Enzo supercar correct. Sometime in 1958, Ferruccio purchased a Ferrari 250 GT. Unfortunately he thinks Ferrari 250 GTO engine was too noisy, especially in girboksnya. Shortly thereafter he met with Enzo Ferrari. Complaints submitted yet dicuekin ama Enzo. That's good input but would convey the Enzo instead told him to leave. I do not know what to say when it's Enzo told Ferruccio. Expelled would certainly hurt Biqin Ferruccio ama Enzo. He finally decided to make their own cars and ambition to beat Ferrari.

Most of the Lamborghini namanama taken from the names of the bull. Known, Ferrucio Lamborghini was born in the shadow of the zodiac Taurus. So, not coincidentally, the cars from Lamborghini is always using namanama bull. For example, the first production of Miura.Model Lamborghini Lamborghini is taking the name of a bull owned by a wealthy businessman complaint Sevilla, Eduardo Eduardo Miura Miura.Kebetulan have good relations with Feruccio. During a visit to Sevilla, Ferrucio often amazed by Eduardo Miura bull belonging.

Aventador name refers to a bull that received Trofeo de la Pena La Arena Madronera in Saragossa, Spain, in 1993. Other names that are very typical of the bull was Murcielago Murcielago.Nama drawn from the true story of the struggle of a legendary bull who lived in 1879.

Bull named Murcielago is still alive despite having been stabbed 28 times in the arena matador.Sang matador, Lagartijo, ultimately decided not to finish the Murcielago as amazed by its power withstand sakit.Cerita different flavors for Lamborghini Reventon. The name is taken from a bull who just managed to snuff out the life of a bullfighter from Mexico, Felix Guzman. Embedding typical bull names are difficult abandoned saja.Jadi, although this time Lamborghini surprised the world because they do not want anymore to use a manual transmission, giving the name of the bull that carried the typical pioneer will never be abandoned.