Please Share this article is useful !
Francesco Totti was born in Rome, Italy, 27 September 1976, as a player born in Rome and graduated academy AS Roma, Francesco Totti was born and raised in Rome's Porta Metronia environment and is Romanista. Totti made his first senior to Rome when he was only 16 years old in March 1993 against Brescia away from home. In 1995, Totti had become a regular for Roma and captained the club in 1997, a post that he has retained ever since.

Prince of Rome an icon of Rome's legendary, not only for his prowess on the gridiron, but also because of the act-his actions are often the media spotlight. to say he is a versatile actor in the field. dribling action and also action divingnya both AS Roma football made without the presence of Totti is like opera without a story. A lot of great players who have exceeded his accomplishments, but there are things that stand out in figure Totti make players different from the others. He had a big impact for his team. AS Roma is very dependent on Totti, one of the most valuable techniques of the players are keeping the ball, passing and his free-kick, but it is clear from all of that because he has the talent to be an actor on the gridiron. 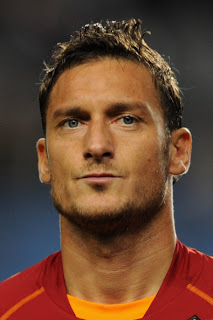 something that can add confidence to his teammates. One of the properties that no other player is that he always played with confidence, a penalty kick low and towards the center is one of the gambling in football, but more success because he is a very confident player. dropped when collided with an opposing player has a 50-50 chance, 50% and 50% of his success he will get a yellow card prize. The character has made the whole world knows.

Totti until now known as the symbol of Roma and earned the nickname "Prince of Rome" by the club's loyal tifosi. Francesco Totti has always marked as the Golden Boy of Italian and at Euro 2000 he is proving its potential. He has earned his first international trophy to Italy two years ago in 1998 qualifier against Switzerland in Euro 2000 and was one of the best players in the competition.

Together with Gabriel Batistuta, Hidetoshi Nakata, and Cafu, Totti drove the Italian capital club won Serie A's third in 2001. Having participated in the Italy squad under coach Marcelo Lippi won the world title at the World Cup in Germany 2006, Totti then resigned from the Italian national team. But do not rule out returning to the Italian national team when the coach called him. Ilary Blasi is married to and has been blessed with 2 children named Cristian and Chanel.

Totti never get the golden boot in the season 2006/2007, scoring 26 goals in Serie A. Totti is the second Italian player Luca Toni got it after the previous season. Totti made his debut with Rome in 1993 and is currently paid 5.8 million euros per season, or is the highest among other Roma players.