They first soared through the 1987 album Appetite for Destruction and later released two albums simultaneously Use Your Illusion I and Use Your Illusion II. The song created a "life story", well it started the year 1982-1993, or thereafter until 2003.

The song is a story created such Nightrain AXL and teman2nya who drank their liquor Nightrain very cheap because it's all they can afford, and want to get out of the situation. Subsequently told anyway, the first song creation GN'R, ie Do not Cry, and other recognized song came out just when they began to play together. 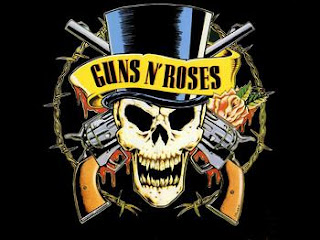 Breakdown (split) as one of the chapters of interest. The origin of intra GN'R, Adler's dismissal hobby nge-drugnya was "chaotic" by Slash and Izzy, Gilby until dismissal Axl also remain in use until 1995. There is also a conflict with Nirvana at that time, 1993, has a power-like abilities GN'R. Furthermore, post-GN'R album is not impressive: Spagetti Incident?!, Businesses that produce Chinese Democracy adrift, not intentional or without cause. Axl alone with GN'R had faced the harsh reality in mid 1996-1997, his wife filed for divorce, her mother died, West Arkeen an overdose (OD), nor his cousin OD while rising with Blind Mellon, Shannon Hoon. Axl stress, battered, and depression.

Sweet Child O 'Mine
In these circumstances, the fact Axl has produced several songs, such as Oh My God who became Ost. End of Day 1999. Arnold, who is very fond of GN'R since the first meeting in the pub especially on one night, returning to spawn Axl invites his hopes of a successful birth as in 1992 with the song outside venom: You Could Be Mine as Ost. Terminator 2: Judgmen Day.

1999 film that are less in demand, it also delivers New GN'R is not booming. But that case collapsed instantly, when unexpectedly Axl performing live with Gilby Clarke and his band in 2000. Axl and Gilby band sing old songs owned by Rolling Stones, like death flowers. Suddenly awakened media. With his style, boasted that Axl is finalizing his new album, and will be launched. Formation of new members, and then leaked to the public, such as Flink, Buckethead, and a longtime member of GN'R Illusion, Dizzy Reed, nor new songs through live dinyayikan were held that year even though the band have shared the stage premises, such as Linkin Park.

In 2001, the New GN'R gig at Rock in Rio III. Wonderful, enthusiastic audience as eliminating the presence or absence of new GN'R. The audience enjoyed it. During the year 2001-2002, New GN'R toured, whether in the U.S. or Europe, both successful and equipped with riot because the concert was not so. Axl acting up again, at one concert in the U.S., Axl apparently chose to watch basketball in a hotel room rather than be above penggung live performance.

The existence of GN'R increasingly exist as a series of concerts performed permanently since 2006, even to Asia such as in Japan until early 2008. And finally, on Nov 23 2008, GN'R album launch Chenese Democracy (CD), which is very long-awaited, and it reached the top of the charts in the world. Unexpectedly, the song You Could Be Mine were considered remarkable by Stenning, to Ost. Terminator back in T4: The End Begin in 2009. GN'R new faces through the songs on the CD, and fascinating memories through film T4, further strengthened to remain in the same row and sturdy, which is as Big Fans of Guns n 'Roses!!!.