Please Share this article is useful !
Ibn Taymiyyah was born in Harran, one of the main cities in the Arabian Peninsula that lies between the river Dajalah (Tigris) and Euphrates, on Monday 10 Rabiu `ul Earlier this year 661H. He is a priest, qudwah, `Alim, Zahid and Da` i ila Allah, whether by word, action, patience and jihad; Shaykh al-Islam, Mufti Anam, defenders dinullah daan penghidup Sunnah Prophet Allaah `alayhi wa sallam who have been turned off by a lot of people Ahmad bin Abdis bin Abdillah bin Salam Al-Khidhir ibn Muhammad ibn Taymiyyah Al-An-Numairy Harrany Ad-Dimasyqy.

He emigrated to Damasyq (Damascus) with her parents and her family when she was a child, due to the invasion of the Tartars on negerinyaa. They traveled migrate at night by dragging a wagon filled with books of science, not the jewelry items or property, without any animal-even on their mounts.

A wagon when they were damaged in the middle of the road, until the enemy troops almost caught him. In these circumstances, they'd istighatsah (complain problems) to Allah Ta `ala. Finally, they joint book-his book can be saved.

TO GROWTH AND SCIENCE 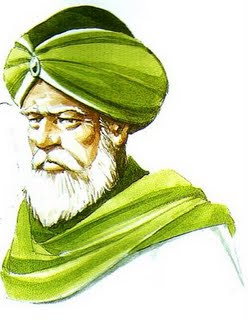 Since little has been visible signs of intelligence on his self. As soon as he arrived in Damascus soon memorized the Qur `an and look for the various branches of science to the scholars, and experts huffazh hadith country. Intelligence and brain power to make the cleric was dumbfounded.

When he has not reached the age of a dozen years, he has mastered the science of Islamic Theology and has experienced areas commentary, Hadith and Arabic. In these elements, he has reviewed the Musnad Imam Ahmad up a few times, then kitabu-Sitta and Mu `Clock At-Thabarani Al-Kabir.

Once, when he was a kid there was ever a great scholar of Halab (the other cities in Syria now, pen.) Who had come to Damasyiq, specifically to see the boy named Ibn Taymiyyah that intelligence became a byword. After the meeting, he gave a test by submitting a dozen matan hadith as well. Apparently Ibn Taymiyyah was able to memorize it quickly and accurately. Similarly, when presented to him some sanad, beliaupun appropriately re also able to pronounce and memorize. Until scholars said: If the child is alive, surely he later has a great position, because there has never been a child like him.

Since childhood he lived and grew up in the middle of the scholars, have the opportunity to drink of your heart's content in the form of libraries of useful books. He infakkan all his time to study and learn, explore science principally Qur'aan and the Sunnah of His Messenger sallallaahu `alaihi wa sallam.

More than all that, he is a tough guy stance and firmly grounded in the lines that have been ordained by God, follow His commandments and stay away from all of his ban. He once said: If dibenakku'm thinking of a problem, whereas it is an abstruse problem for me, then I'll forgiveness a thousand times or more or less. Until my chest into the field and the problem was solved. That I'm doing well in the market, in the mosques or madrassas. Everything is not my way to make dhikr and forgiveness until fulfilled my goal. So it went on Ibn Taymiyyah, always earnest and not incessantly seek knowledge, even though he has become a prominent jurists dinnya `and science and has reached the highest level.

Al-Hafiz Al-Mizzy said: I've never seen the likes of Ibn Taymiyyah .. and I've never seen anyone more knowledgeable of the Book of Allah and the Sunnah of the Prophet shallahu `alaihi wa sallam, and more ittiba` than him.

Al-Qadi Abu Al-Fath Al-Eid bin Daqiq said: When I hang out with him, I saw he was someone that all the science is in front of his eyes, whenever he wants it, he took it live, it's up to him. And I've said to him: I never thought I'd created manasia like you.

Al-Qadli Ibn Al-Hariry said: If bukah Shaykh al-Islam Ibn Taymiyyah, then who is she? Shaykh Experts Nahwu, Abu Hayyan An-Nahwi, as he gathered with Ibn Taymiyyah said: Never pair of eyes to see people like him ..... Then through his poetry verses, he gives a lot of praise.

Mastery of Ibn Taymiyyah in some perfect science, namely the interpretation, Aqeedah, Hadith, Fiqh, Arabic and many other branches of Islamic science, until he was beyond the ability of the scholars of his time. Al-`Allama Kamaluddin bin Az-Zamlakany (d.. 727 H) said: Was he asked about a field of science, so anyone who heard or saw (the answer) would have thought that he was as if it was only in charge of science, the also be sure that no one can match. The Fuqaha from various circles, if they would sit down with him to take lessons useful for completeness schools in Islam they have not been previously known. Unprecedented, it can be broken hujahnya. He never spoke of a branch of science, both Sharia sciences or other science, but of each scientist was definitely shocked. He has a beautiful ink streaks, expressions, composition, distribution of words and explanations are very good at making books.

Imam Adh-Dzahabi rahimahullah (d.. 748 H) also said: He is the epitome of wit and speed of understanding, the greatest understanding of the Al-Kitab was-Sunnah and dissent, and oceans naqli arguments. In his day, he is only good in terms of knowledge, asceticism, courage, generosity, amar ma `ruf, nahi unjust, and many books were composed and supremely mastered hadith and fiqh.

At the age of seventeen he was ready to teach and berfatwa, figures prominently in the commentary, the science of jurisprudence and all the other sciences, both its subjects and its branches, the detail and accuracy. On the other hand Adh-Dzahabi said: He has perfect knowledge Rijal (sanad chain), Al-Ta `dil Jarhu wat, Thabaqah-Thabaqah sanad, knowledge of sciences among saheeh and da'eef hadeeth, matan-matan memorized hadiths him alone .. So no one at that time who could match or approach the level .. Adh-Dzahabi say again, that: Any hadith unknown to Ibn Taymiyyah, then it is not a hadith.

Similarly, among others, some scholars praise on him.


DA `I, Mujahid, exterminator BID` AH DESTRUCTION AND ENEMIES
History has recorded that not only Ibn Taymiyya as a da `i are brave, tough, wara`, ascetic and religious experts, but he was also a brave man who is an expert equestrian. He is an advocate for every inch of Muslim land by pedannya enemy of tyranny, as he is the defender of aqidah people with tongue and pen.

Ibn Taymiyyah boldly shouting his command to Muslims to rise up against the invasion of the Tartars when attacked Sham and beyond. He himself joined them in the battlefield. Until there is an amir who has deen is good and right, gives his testimony: a sudden (in the middle of the battlefield) seen him with his brother yelling loudly gave the command to attack and give a stern warning not to run. Finally, by the permission of Allah Ta `ala, Tartar forces successfully destroyed, the country safe! Levant, Palestine, Egypt and the Hijaz.

But because of the hardness, courage and boldness in inviting him to al-haq, eventually just burn the malice and hatred of the rulers, the clergy and the people who are not happy for him. The Munafiqun and the lacut then blew up toxins slander so he had to undergo various pressures in pejara, banished, exiled and tortured.

PRISON LIFE
Blowing-blown the breath of slander munafiqin and his minions that he was under heavy pressure resulted in various prisons, it is faced with a stoic, calm and happy. Recently he had to go to jail Qal `ah in Dimashq. And he said: Behold, I waited for this moment, because in it there is a great kindness.

In his poetry he is also famous saying:

I, parks and dikebunku in the chest

Wherever I went, he was always with me

and not ever leave me.

Terusirku of the country is recreation.

He once said in jail:

People in prison are those who imprisoned him from his Lord, who is the person who held captive by those desires.

Apparently prison did not deter him clarity islahiyah his nature, did not stop preaching and writing books about faith, commentaries and books refutation of experts bid `ah.

His admirers admirers outside the prison more and more. While in prison, many inmates who became his student taught by him that they iltizam the shari'ah `at Allah, always forgiveness, prayer beads, prayer and deeds-deeds authentic. So the prison atmosphere became crowded with the atmosphere of worship to God. Even told many inmates who have got a right to be free, to remain in jail with him. Finally, the prison became full of chanting people.

But the fact is he made enemies of the Ahl-ul munafiqin and bid `ah increasingly spiteful and angry. So they continue to seek the authority to move him from one prison to another. But this also makes him more famous. In the end they demanded the government to kill him, but the government did not listen to their demands. The government just issued a decree to confiscate all stationery, ink and papers from the hands of Ibn Taymiyyah.

But he still tried to write in places that allow the charcoal. He wrote letters and books with charcoal to his friend and his students. All it shows how great the challenge, to freedom of thought and writing is limited. It also shows how his patient and tabahnya. May God bless, and be pleased with Ibn Taymiyyah and put us all into paradise.

Death of
Her death in prison Qal `ah Dimashq witnessed by one of his prominent disciples, Al-` Allama Ibn Qayyim rahimahullah.

He was in jail for two years and three months and some days, twenty sick days. While in prison he has always worship, dhikr, Tahajjud and read Al-Qur `an. Narrated, in every day, he read three chapters. During that time he had menghatamkan Al-Qur `an eighty or eighty-one times.

It should be noted that as long as he was in prison, never accept any gift from the ruler.

His body was dishalatkan in Jami `Umayyad mosque after noon, the prayer. All residents Dimashq (capable) present to menshalatkan body, including the `Umara, scholars, soldiers, and so on, until the city Dimashq a total off day. Even all the Dimashq (Damascus) old, young, men, women, children came out to honor his departure.

A witness has said: According to all that I knew no one was left except the three main enemy. All three men went and hid himself for fear beaten period. Even according to historians, unprecedented dishalatkan bodies and respected by so many people but Ibn Taymiyyah and Imam Ahmad ibn Hanbal.

He died on the 20th of Dhul Hijjah th. H 728, and was buried at a cemetery next to his brother Ashar Sheikh Jamal al-Islam Sharafuddin. May Allah have mercy on Ibn Taymiyyah, figures Salaf, da `i, mujahidd, exterminator bid` ah and destructive enemy.