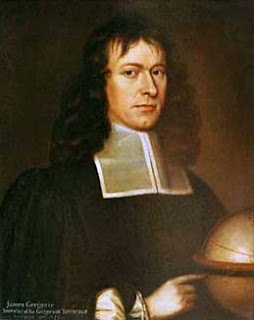 James Gregory is the son of Gregory and Janet pair John Anderson was born in a small town, Drumoak, about 15 miles from Aberdeen, Scotland. John Gregory was an abbot at Drumoak because of her educational background in the field of theology and graduated from St. Joseph's University. Andrews. Her sister, Alexander Anderson was editing work, and once a student Viete Viete while studying in Paris. Gregory is the youngest child who has two older brothers, Alexander and David. Age differences with Gregory David was ten years old.

Early recognition of mathematical Gregory is the mother who taught him geometry. But when she was 13 years old, his father died and the task of educating left to David Gregory. David gave the book Elements of Euclid's work to learn her sister, who quickly mastered. Before entering the university had studied at Marischal College in Aberdeen. Later, through connections David, Gregory can get acquainted with John Collins (1625-1683), pusatakawan Royal Society. Collins was also a mathematician with pleasure as [Marin] Mersenne in France, namely the central correspondence other mathematicians.

Making a telescope
Although Gregory weak health conditions, but this does not prevent him to study fields other than mathematics. Studying Optiks and build telescopes are areas of concern. With the encouragement of an older brother, David, Gregory wrote a book Optima Promota postulates that contains 5, 37 definitions and 59 theorem (systematics similar to the book Elements of Euclid) of the theory of reflection and the reflection of light.

Light theory presented in the book is used as a basis for making a telescope that has the effect of reflection. By using a mirror konkave (convex / concave) parabolic capable of making light converged at one focus of the mirror konkave elipsodial. Refelsi light coming from the surface will be converged at the second focus located behind the mirror.

There is a hole in the primary mirror is made so that light can pass through and the dinar which may be captured by the lens of the eye. Gregorian telescope's tube to be shorter than the total width of the focal points of the second mirror. The idea to use mirrors and lenses to telescopes is new, and it turned out this way more effective than using mirrors or lenses separately. Ways of making it a model telescope can not be done.

In 1663, Gregory went to London. Met with Collins and a true friend. Through Optima Promota Collins book can be published and create a telescope design in the book. Collins suggested that Gregory met optician named Reive, but again failed. Gregorian telescope is, ultimately, can be made by Hooke (read: Newton and Halley) ten years later. While in London, Gregory met with the President of the Royal Society, Robert Moray, who then tried to bring Gregory to Huygens in Paris, because it has the same interests (read: Huygens).

Working in Italy
As late as 1663, Gregory went to Italy and became acquainted with the successors of Torricelli, especially Stefano Angeli. Angeli's works include infitisimal method with an emphasis on the quadratic equation applicable to the form of a spiral, parabola and hyperbola and tried to find breadth apparently appealed to Gregory and immediately learn the Angeli in the period 1664 - 1668 at the University of Padua. Keep learning apparently captivated Gregory then study two variations of the beginning of calculus, methods of tangents (differentiation) and squaring (integration).

Through the two posts above, Gregory gave an important basis for the geometry infitisimal that would become very important. More than a decade later, when the analysis was progressing very quickly, before it was completed by the discovery of the next mathematician, Newton and Leibniz (including Huygens, Barrow). The work was also berusaja prove that π and e are transcendental numbers, but the reasons cited Gregory is still wrong, but the major breakthrough idea: convergent, determining function, aljabarik functions, transcendental functions, and others.

Two works of this magnitude, the contents of which are the findings, published simultaneously in France, Italy, the Netherlands and the UK. His first book Cartesian remodel that still distinguish between the curves "geometrical: and" mechanical ". Gregory would rather divide mathematics into the theorem 'general' and unproved 'specials', not divided into functions of algebraic and transcendental.

Conflict with the Huygens
Gregory returned to London in mid-1668, right into St. Andrew, and send a copy of the book Vera calculi circuli et hyperbolae quadratura he sent a letter to ask for feedback from Huygens. Instead of responding, Huygens published a review of the book was published in July 1668. Mentioned that he had developed some findings and stated that he was the person who first gave evidence against the results. Knowing Huygens comments discrediting himself makes Gregory mentioned that the ideas were stolen by the Huygens without notice.

Relations between the two mathematicians lead to conflict, although at that time the conflict between common mathematicians. It is just like the conflict between Newton and Leibniz that occurred during this period as well. This conflict can never be reconciled because each stick with their respective establishments. Gregory prove himself and verification conducted by Huygens is also valid. In the 1930's, Turnbull conducted a study of the papers in the library of St. Gregory's work. Andrew. Finally, the findings stated that Gregory is genuine and can be said to be brilliant for the period.

Gregory Series
Towards the end of 1668, Gregory completed what is known as the series sin, cos, and tg. Gregory gave the formula that:

This formula is used to solve the classical problem in manufacturing tables for a cruise. Issuing Exercitationes Geometricae as counter-attack (counter-attact) on Huygens. Although the methods used are not disclosed, the booklet includes many series, the logarithmic integral function and other ideas that are related. One series is called by the name of Gregory in a series like this.

Gregory found separately with Newton, binomial theorem for fractional rank, the result was known earlier by Newton (but not yet published), and through various processes of differentiation, which was previously known as the Taylor series. Developed so well known Maclaurin series for sec x and tg x and arctg arc sec x and x., Before being formulated by Cavalieri into the above formula.

Do some research
At St. Andrew, Gregory taught only two times in one week and the time used for tasks metematikal and astronomical. Recent research has always presented to Collins by letter. Correspondence for 6 years, until his death, between Gregory and Collins is still stored in university libraries St. Andrew to find out how the leading mathematicians of the time of discovery.

Send the book by Collins [Isaac] Barrow to Gregory developed the idea of ​​the book before it is sent to Collins. Year 1671, Gregory discovered Taylor theorem (never published by Taylor until the year 1715), in which the theorem is contained in the letter to Collins. Nevertheless Collins a letter stating that Newton also found similar results, Gregory decided that Newton published his findings before he himself published. Apparently conflicts with the Huygens still made an impression on his heart and did not want it to happen between him and Newton as well.

In the library of St. atad space. Andrew is not blocked by any object, Gregory put the telescope. Pendulum clocks hang next to a window for observation. Pendulum clock purchased in London in 1673, but the idea had been patented by Huygens in 1656, before Huygens wrote pendulum theory.

Moving to Edinburgh
In 1674, Gregory collaborate with colleagues from Paris to simultaneously observe the lunar eclipse. Only a year earlier, Gregory allowed by the university to purchase equipment for the observatory, and brought Gregory to raise funds to build an observatory. Returned to Aberdeen and knocked on the door of the church to help build the observatory. First obtaining the advice of Flamsteed, the astronomer royal, before start buying equipment observation.

Gregory left St. Andrew to Edinburgh in 1674. Aasan move back because jealousy is triggered by other mathematicians. In Edinbergh, Gregory became the first to occupy the chair of mathematics department there. This is not a long-held position, because it is almost a year later Gregory died.

At the time of this death, Gregory was still actively doing research in the field of astronomy and mathematics. In mathematics, Gregory was peeling a cubic equation to solve the problem within five (quintic) in algebra and find interesting things on Diophantine problems. Died suddenly. Night while observing satellites of Jupiter with his students by using telescopes, suddenly had a stroke and went blind. A few days later Gregory died young, aged 36 years.

Contribution
Pursue complementary fields, mathematics and astronomy, without losing focus. Coming to his light and initiated, although crude, the basics of what was later known as calculus. Starting as an attempt to calculate the area of ​​irregular areas such as parabolic, hyperbolic, but it is not alleged to be the forerunner of calculus.