Please Share this article is useful !
James Watt (Greenock, Scotland, January 19, 1736 - Birmingham, United Kingdom, August 19, 1819) was a great engineer from Scotland, United Kingdom. He successfully created the first efficient steam engine. Apparently the steam engine is one of the forces that drove the Industrial Revolution, particularly in Britain and Europe in general. To appreciate his service, his last name is used as the name Watt power unit, such as engine power and electric power.


James Watt, the Scottish inventor who is often associated with the steam engine, was a key figure of the Industrial Revolution. Actually, Watt was not the first to make a steam engine. Similar design composed also by Hero of Alexandria in early AD. In 1686 Thomas Savery make patents a steam engine used to pump water, and in the year 1712, an Englishman Thomas Newcomen, patents also make similar items with a more perfect version, but the creation of the Newcomen engine was low quality and less efficient, can only be used to pump water from coal mines. 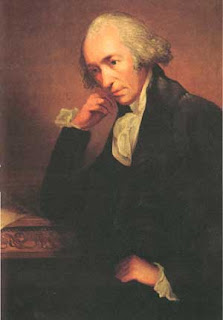 Watt became interested in the happenings in the steam engine in 1764 when he was fixing the Newcomen engine creation. Although Watt received only one year of education as a tool builder, but he's got great talent creator. Perfection by doing the preparation Newcomen engine was so important that it is worth actually think creators Wattlah first practical steam engine.

Watt patented the first success in 1769 was the addition of a separate space strengthened. He also make the separator insulation to prevent heat dissipation in the steam cylinder, and in 1782 he invented the double. With a few minor fixes, this update menghasilan increased efficiency steam engine with a four-fold or more. In practice, the improved efficiency is the result of an intelligence but is not very useful tools, nor has exceptional usability judging from the corner of the industry.

Watt also found (in 1781) a set of teeth to change the motion of turning the machine so that a rotating motion. This tool massively increase the use of steam. Watt also managed to create a circular motion controller automatically force (in 1788), which causes the engine speed can be automatically monitored. Also creates pressure gauges (year 1790), speedo instrument, appliance instructions and vapor control equipment in addition to other repair equipment.

Watt himself had no business talent. However, in the year 1775 he made alliances with Matthew Boulton, an engineer and a businessman whose deft. For twenty-five years later, Watt and Boulton company produces a large number of steam engines and both become rich. Dual working steam engine Watt discovery in 1769 is difficult to exaggerate the importance of the steam engine. Because, there are many other inventions which plays an important role encouraging the development of the Industrial Revolution. For example, the development of world mining, metallurgy, and various machine tools. Lifeboats were sliding back and forth in a loom (John Kay's invention in 1733), or loom (discovery James Hargreaves in 1764) preceded the creation Watt all happen. The vast majority of these findings it is only the lack of significant improvement and none had a vital significance in relation to the Industrial Revolution bermulanya. As with the discovery of the steam engine which plays an important role in the Industrial Revolution, the situation seems to be experiencing another form. Previously, although the use of steam power for the windmill and water round, the principal source of mechanical power lies in human power. This factor is very limiting industrial production capacity. Thanks to the discovery of the steam engine, these limitations are eliminated. Large amounts of energy can now be channeled to productive things that uphill with very swift. Oil embargo of 1973 made us realize how miserable if the reduced energy and capable of crippling the industry. This experience, at some level, encouraging us to imagine the importance of the Industrial Revolution due to the discovery of James Watt.

In addition to the benefits of power for factories, steam engines also have a large order in other areas. In 1783, the Marquis de Jouffroy in Abbans successfully used a steam engine to drive the ship. In 1804, Richard Trevithick created the first steam locomotive. None of the models were commercially successful starter. Within a few decades, then both ships and trains produce a revolution in both the land and sea transport.