Please Share this article is useful !
Jimmy Donal "Jimbo" Wales or Jimmy Wales was born in Huntsville, Alabama, USA, August 7, 1966, His father was the manager of a grocery store, while her mother (Doris) and her grandmother (Erma) to take care of a small private school in the form of "traditional school one classroom ". where Wales school. As the number of students with her classmates always only four children, the school brings together students grade one to grade four and grade five to grade eight.

After graduating from the eighth grade, Wales entered Randolph School, a preparatory school for college, which is the beginning of the movement supporting the use of computer labs and other technology facilities for use by the students. Wales said that the cost of schooling in there too expensive for his family, but education is important.

"My family was always concerned with education ... a very traditional approach to education as the foundation of a good life." He received a bachelor's degree in finance from Auburn universias and continued his studies in finance at the University of Alabama and earned a master's degree in finance. After that, he followed the doctoral education at the University of Indiana. During a post-graduate student, he taught at both universities, but he did not do a dissertation required to earn a Ph.D. 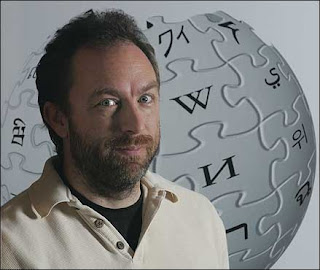 From 1994 to 2000, Wales worked as research director at Chicago Options Associates, a futures brokerage firm and options in Chicago. According to Daniel Pink of Wired magazine, to do a "speculation of interest rate and foreign currency" he could soon gather enough money to "pay for himself and his wife for life". In 1996, he founded the site search portal called Bomis, which also sells things that are erotic to mid-2005. In September 2005 he was interviewed by a cable television station C-SPAN about his involvement in the past about it, called by Brian Lamb, the interviewer, as "pornographic images". Wales responded by describing Bomis as "search engine site for men", with a target market that is similar to Maxim Magazine.

Larry Sanger proposed to make the encyclopedia using wiki software on January 10, 2001, and Wales trying to make it happen, and launch it on January 15, 2001. when it is, Wikipedia is a wiki-based website as a facility to make initial content encyclopedia that is done by the general public to be examined by experts and then inserted into Nupedia, but Wikipedia's rapid development project to be a more developed and Nupedia become dormant. Sanger resigned from the project in 2002.

In mid-2003, Wales founded the Wikimedia Foundation, a non-profit corporation based in St. Petersburg, to support Wikipedia and other similar projects. He pointed to himself and two of his business associates who are not active Wikipedian a member of the board of directors consisting of five people, two other members are elected community representatives. According to Daniel H. Pink of Wired magazine, by 2004 Wales has spent approximately U.S. $ 500,000 to set up and operate the projects his Wiki, almost entirely from his own pocket. At the end of the fundraiser in February 2005, the Wikimedia Foundation is supported solely by donations and gifts. Wales became increasingly involved with promoting and talking about the Wikimedia projects, and to do so, he visited conferences and meetings, such as "Wikimeets" and Wikimania. 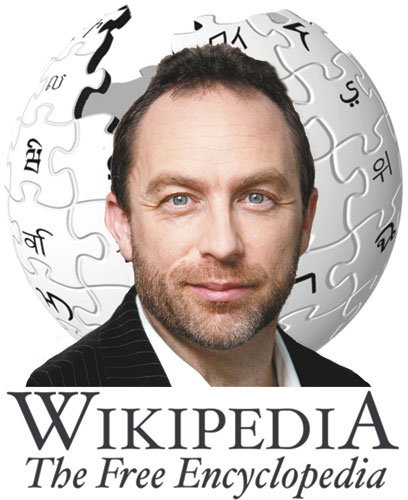 Wales is often explained his goals will Wikipedia. In an interview with the website Slashdot, he said, "Imagine a world in which every person can get free access to all existing science.'s What we do." In late 2005, Wales was criticized for editing his own biography in a way which is called by some as "revisionist history." In particular, Rogers Cadenhead draw attention to the log file shows that Mr. Wales has removed references to Sanger as co-founder of Wikipedia. He is also known to have changed in a way that references Bomis referred to as reducing the element of sexuality of some of the products his company earlier. In both cases, Wales found that conversion done solely to make it be more accurate. Wales explained that Sanger was its employees, and he always regarded himself as the sole founder of Wikipedia.

In 2006, Wales told the Boston Globe newspaper that "absurd" to call Sanger as co-founder. However, Sanger strongly deny this. He has been known as the co-founder of Wikipedia, at least since September 2001, and referred to himself as at least since January 2002. After the event, Wales apologized for editing articles about his own biography (less preferred action at Wikipedia). Wales said in an interview in Wired magazine, "It should not be done, I myself was not supposed to. Sorry I did it." However, he still insisted that he was the sole founder of Wikipedia.

According to a press leaflet issued by Wikia, Wikia (formerly known as Wikicities) is a wiki hosting service founded in October 2004 by Jimmy Wales and Angela Beesley. Wikia is a wiki-based collection sites MediaWiki software and operated by Wikia, Inc.. devoted to various communities. Wiki site is free for the visitors and editors, and the income derived from advertising. After renaming, Wikia announced that it has received a grant of U.S. $ 4 million in combined capital from a group of investors. "The investors are very interested in this company, and the problem only select investors who will be invited to work together to ensure that people who become pemodaladalah the people who have the same confidence to our mission," said Wales, who operates Wikipedia and Wikia are apart from his office in St. Petersburg, reports Wrought Bay Business Journal.

Wales appointed to the Berkman Center for Internet and Society at Harvard Law School in 2005. According to a press leaflet issued by SocialText, on October 31, 2005, Wales joined the board of directors of Socialtext, a wiki technology development company for business. In 2006, he joined the board of directors of Creative Commons, a nonprofit organization. Wales received an honorary degree from Knox College on June 3, 2006. Electronic Frontier Foundation Pioneer Award awarded to him on May 3, 2006. Wales was the first to be included in the "Scientists & Thinkers" in a special issue of Time magazine dated May 8, 2006 ("Biography and ideas most influential people in the world"), a leading 100 electoral list in Time magazine in 2006.