Please Share this article is useful !
Johann Wolfgang von Goethe was born in Frankfurt on August 28, 1749. The eldest son of Johann Kaspar Goethe pasanagan and Katharina Elisabeth Textor Goethe. Goethe's father, Thuringian origin, studied Law at the University of Leipzig. Although he did not fit his science career, but in 1742 he was able to achieve a position as Kaiserlicher Rat (sort of government advisors), who in 1748 married the daughter of Frankfurt merchant. Of all his children were born, the parents just found Johann Goethe and his sister Cornelia are living into adulthood. His sister was married to a close friend of Goethe Goethe, J. G. Schlosser in 1773.

Apparently, creativity and sensitivity talent imagination Goethe inherited from his mother, while a calm demeanor and unwavering inherited from his father. Multi talents of Johann Wolfgang von Goethe shows the greatness of thought and personality. Napoleon was impressed to Goethe, after their meeting in Erfurt when he said: "Voila un homme!" (Here's a young kid!)-As it seemed the genius of Goethe. Goethe was not only equated with Homer, Dante Alighieri, William Shakespeare or the creativity, but also everything about her life - longevity, wealthy, as well as a calm and optimistic personality - his aura of greatness may be over, Faust, a work German pride.

Goethe live within unhappy childhood, his parents who are located in Grosse Hirschgraben in the city of Frankfurt, as mentioned in his autobiography Dichtung und Wahrheit. He and his sister Cornelia acquire privately educated at home, under the guidance of teachers hired. Books, art, and theater arts are abundant in the surrounding environment seems a lot of imagination and intellectual power honing small Goethe quickly. 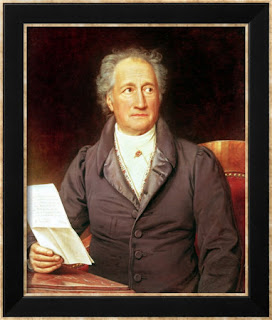 During the Seven Years War French occupied Frankfurt. And a group of French theater entrance in the city, and Goethe, as an influential grandfather, causes it to have free access to be able to watch theater performances. He draws a lot of his knowledge of French through these performances and interaction with the actors. Meanwhile, his literary talent began to take shape through their religious poems, novels, and stories of heroism he made. In October 1765 Goethe-16-year-old flew to Frankfurt to study at the University of Leipzig. He lived in Leipzig until 1768, went on to study law. At the same time he also took courses in art from A. F. Oeser, director of the department of fine arts the Leipzig Academy. Art has always attracted Goethe throughout his life.

During his years in Leipzig, Goethe began to write poems Anacreontic lighter wing. Many of his works in the years that were inspired by his love for Anna Katharina Schonkopf, wine seller's daughter at a restaurant he used to eat dinner. It was he who appeared as "Annette" on any of his work during the year 1895 was. Swelling of the veins in one of his lungs forced to end his studies in Leipzig Goethe. From the year 1768 until the spring of 1770 Goethe lying at home, forced to continue his studies in Leipzig at home. That was the period in which he did a lot of introspection seriously. Exploration in poetry and rococo acreontic wing since the start of Leipzig immediately passed along with the rapid attainment of peak of his art.