Please Share this article is useful !
Boyn John Dunlop was born into a peasant family in Dreghom, North Ayrshire Scotland on February 5, 1840. He is the inventor of the wind belt. As a child he lived in his hometown. Dunlop Young completed his studies and obtained a veterinarian in Dick Vet, University of Edinburgh in Scotland. After finishing school, Dunlop first practice as a veterinarian in Edinburgh, Scotland, and then in Belfast, Ireland. In his youth, John is known as a hard worker. Even at the age of 19 years he has worked to help the economy whose parents are farmers. In 1871 John was married to Margaret Stevenson and her three sons.

The origin of the creation of the pneumatic tire encouraged when John first designed the wheel to his son's bike are intentionally designed to reduce the shock when riding on rough roads which cause headaches. John tried hard to answer complaints that children feel less comfortable with his tricycle. In 1887, John Boyd Dunlop successfully designed and developed the first pneumatic tire for his son's tricycle.

Most of the literature states, the first air-pressure rubber tires made John Boyd Dunlop rubber tires are designed to fill the air like the common use of motor vehicles today. Modification of the tire in the tire stitched and glued to the edges. John also make improvements tricycle tire solid rubber and wrap the tube with pumped with air. Tires are then mounted on the rear wheel bicycle with fitted linen tape to give the tire tread. 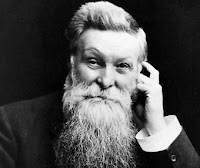 An Irish industrialist William Harvey du Cros interested in the discovery of John Dunlop tires. Harvey interested after seeing a cyclist won the race in Belfast with artificial pneumatic velocipede John. Harvey then provide capital to John for market discovery. Later John with William Dunlop Rubber Company building, which attracted the attention of a tire company in the world. Findings brilliant John is regarded as groundbreaking progress in the development of rubber tires in the 18th century. John recently patented inventions on December 7, 1888 in the United Kingdom UK. Although it has been patented, John the findings known to be invalid after the first tire design was created by Robert William Thomson. R.W. Thomson discovered and patented the pneumatic tire in 1845. However, with the invention of modern tires, more recognized than finding John RW Thomson.

Tires Dunlop tire design was first advertised in 1889 at The Irish Cyclist. Two years later, John Boyd Dunlop Tyres Dunlop founded the first factory in Dublin, Ireland. One year later John mass-produced tires in Belfast. In 1891 built Fort Dunlop Factory in Birmingham, England that is now the headquarters of Dunlop. Dunlop growth of pioneering multinational corporation to success quickly. After its introduction in 1888, Dunlop pneumatic tires became standard equipment for the bike as it is very good for use on rough roads. In the same year, for the first time Dunlop tires used on cars manufactured by Karl Benz.

Dunlop is now the world's leading tire brands with a wide array of products that have been scraped palms millions on highways around the world. In the decade of the '80s, Dunlop managed to dominate the market in Germany, Britain, France, and the United States. That was the beginning of the rapid development of Dunlop, particularly in the areas of technology development, production capacity, and global marketing network all over the world. John Boyd Dunlop died October 23, 1921, due to illness. He managed to create a practical tire products that are beneficial to the automotive world.