Please Share this article is useful !
John Dalton (1766-1844) British scientists are at the beginning of the 19th century to the atomic hypothesis put forward in the arena of science. With this act, he presents the key ideas that enable major advances in chemistry since then. To be clear, he was not the first to assume that all material objects consist of a large number of very small particles called atoms indestructible.

Theory Democritus (which is not accepted by Aristotle) ​​are ignored during the Middle Ages, and had little influence on science. Even so, some of the leading scientists of the 17th century (including Isaac Newton) supports a similar opinion. However, no atomic theory proposed and used in scientific inquiry. And more importantly, no one who saw the connection between philosophical speculation about atoms with real things in chemistry. That was the situation when Dalton appeared. He presents "quantitative theory" clear and clearer that can be used in the interpretation of chemical experiments, and can be appropriately tested in the laboratory. 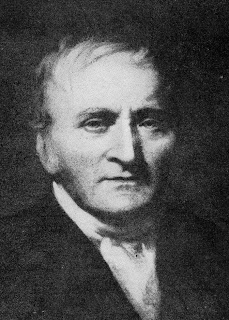 Although the terminology is a bit different from what we use now, Dalton clearly put forward the concept of atoms, molecules, elements and chemical compounds. He was clear that although the total number of atoms in the world so much, but the number of various types of different kind of small. (The book originally recorded 20 elements or groups of atoms; currently a little over 100 elements are known).

Although different types of atoms of different weight, Dalton remains found by two atoms of the same group is the same in all qualities, including "mass" (the quantity of material in an object measured by resistance to change in motion). Dalton include in his list that records the relative weight of the various types of atoms are different, the first ever prepared a list of people and is the key to any quantitative theory of the atom.

Dalton also explained clearly that each of the two molecules of the same chemical combination consists of a combination of similar atoms. (For example, each molecule "nitrous oxide" (N2O) consists of two nitrogen atoms and one oxygen atom). From this particular chemical combination to form something - no matter how prepared or where acquired - always composed of the same elements in the same proportion that fully weight. This is the "law of definite proportions," which has been found experimentally by Joseph Louis Proust first few years.

Once convinced how Dalton presents the theory, so that within twenty years he has been accepted by the majority of scientists. Furthermore, chemical experts follow the program proposed by the book: determine exactly the relative atomic weight; combined chemical analysis of weight; determine the right combination of atoms that make up each group of molecules that have characteristics in common. The success of this program, of course, incredible.
List of Dalton's atomic weight

It is difficult to over-state the significance of the atomic hypothesis. These are the central role in our understanding of chemistry. Moreover, this is an essential introduction of modern physics in general. Just because the problem is so often discussed peratoman before Dalton that he could not place higher in the order of the list this book.

Table of the elements and combinations of John Dalton 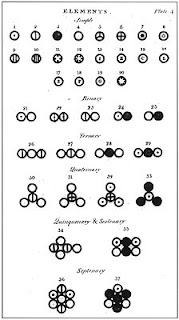 Dalton was born in 1766 in the village of Eaglesfield in the North of England. Formal school just ended when only seven years old, and he was almost entirely self-learning in science. He is a young man who always understand something first than the average normal person, and when she reaches twelve years he was a teacher. And he became a teacher or private teacher most of his life. When he rose fifteen he moved to the town of Kendal, age twenty-six to Manchester and lived there until the final breath out of her throat in 1844. Might need to know, she never married.

Dalton became interested in meteorology in 1787 when she was twenty-one years. Six years later he published a book on the subject. Study of the atmospheric air and generate interest in the gas quality in general. By conducting a series of experiments, he found two laws that control the behavior of gases. First, Dalton presented in 1801, confirmed that the gas-filled volume is proporsiona1 with temperature. (This is commonly known as the "law of Charles" after the French scientist who discovered it a few years before Dalton, but failed to publish the results of its investigation). Second, is also presented in 1801, known as the "law of Dalton" on pressure parts.

By the year 1804, Dalton had already formulated his atomic theory and prepare a list of atomic weights. However, the main book A New System of Chemical Philosophy published recently in 1808. This book made famous, and in subsequent years, interest sows award above his head. Coincidentally, Dalton suffered from a type of color blindness. The situation is even arouse desire him. He studied the subject, and published scientific papers on color blindness, a topic which was written the first time!