Please Share this article is useful !
John Harvard (November 26, 1607 - September 14, 1638) was an English clergyman and founder of the world's most prestigious universities named Harvard College or Harvard University. he gave half his wealth, along with the library, to establish a school and run it constantly.

The Harvard Bridge named for him, as well as John Harvard Library in Southwark, London. John Harvard was born and raised in Southwark, on the south bank of the River Thames, opposite the City of London. He was the fourth of nine children, the son of Robert Harvard (1562-1625), a butcher and tavern owner, and his wife, Katherine Rogers (1584-1635), a native of Stratford-upon-Avon father named Thomas Rogers (1540 -1611), is sometimes considered to have become associates John Shakespeare, father of William Shakespeare (1564-1616). He was baptized in the parish church (now Southwark Cathedral) in 1607.

John Harvard educated at the Grammar School St Saviour in Southwark, where his father Robert was a governor. In 1625, his father, half-brother, and two sisters died of the plague. Harvard then entered Emmanuel College, Cambridge, in December 1627 and received his BA in 1632. Then her mother Katherine died in 1635 and his father Thomas in the spring of 1637. 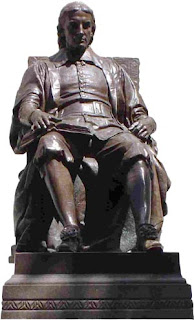 John later married Ann Sadler (1614-1655), of Ringmer, Sussex, in April 1636, she was daughter of the Reverend John Sadler and brother of John Sadler, a lawyer as well as an orientalist. In May 1637 he emigrated with his wife to New England and settled in Charlestown, where many of her classmates had arrived.

Charlestown him a minister of the Church, but in the following year he contracted tuberculosis and died on 14 September 1638. He was buried at the Phipps Street Burying Field in Charlestown. Some treasures Harvard bequeathed about £ 779 (half of his estate) and the New College library or a new school, and his friend, Nathaniel Eaton became the first rector of the school principal or college.

Note Eaton suggests that the development of the new campus began immediately in 1638 with the help of carpenter Thomas Meakins and his son, Thomas Meakins Jr. of Charlestown. It really is built of wood and has its own apple orchard, and is equipped with a shelter or housing for about 30 students. The new school was later renamed "Harvard College" on March 13, 1639. Harvard was first referred to as a university rather than a college by the new Massachusetts Constitution of 1780.